DHARAMSALA: As many as 70 families, living on forest land at Kand village, about 20 km from here, for the past more than 38 years are likely to lose their houses. 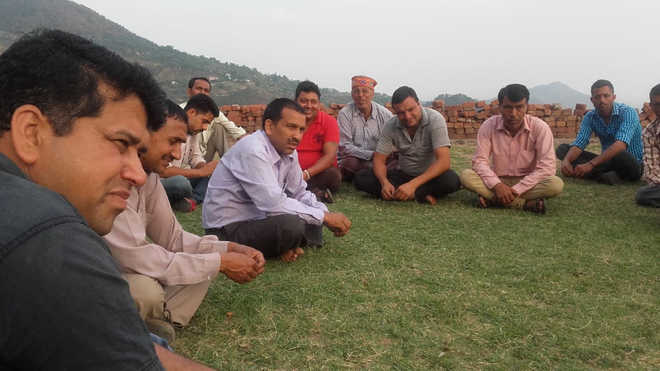 Residents of Kand village, who face eviction after the transfer of forest land to the CUHP at Jadrangal, in Dharamsala.

As many as 70 families, living on forest land at Kand village, about 20 km from here, for the past more than 38 years are likely to lose their houses. In case, the state government does not give them alternative land, they will have nowhere to go.

The land on which the families have been living is being acquired for Central University Himachal Pradesh (CUHP) in the Jadrangal area of Dharamsala.

Sunil Kumar, a resident of Kand village, who is likely to lose his house, said his family was allotted the village common land, which was later classified as forest land in revenue papers in 1980. “Initially, we had a kutcha house, which we converted into a pucca house with our hard-earned money. Now, we are being told to vacate the land as the CUHP campus is coming on it. To add to our woes, the government is also not offering any compensation as the plot on which the houses are located is forest land,” he said.

Gala Ram, another resident, said they had no idea where to go in case their land was allotted to the CUHP and they were not given any alternative land or compensation also. “Our children will lose a roof,” he said.

Akshay Jasrotia, an activist taking up the cause of the affected villagers, while talking to The Tribune, said  the residents of Kand and other villagers, who fell in the area being acquired for the CUHP, were facing problems due to the non-implementation of the Forest Rights Act-2006 in the state. Initially, revenue officials made a mistake by not entering the names of those allotted common land at Kand village in documents. “Later, when the land was classified as forest land, the people turned encroachers. However, still if the state government implements the forest Act, the people living on common land classified as forest land will get rights over it. Under the Act, the communities settled and using the forest land are entitled to compensation in case the land is transferred for some other purpose,” he said.

The issue of implementation of the Act also resonated during the recently concluded winter session in Dharamsala. Farmers and people settled on forest land that was being acquired for setting up the CUHP campus had held a protest during the session and submitted a memorandum to Chief Minister Jai Ram Thakur.

Congress MLA from Palampur Ashish Butail had raised the issue of forest rights of the people being uprooted due to the land being transferred in the name of CUHP in the Assembly. He alleged that the people were being forcefully evicted and made to live in tents.

CPM MLA Rakesh Singha alleged that thousands of poor people, who had been allotted common land to make them sustainable in the state in the 80s, had now encroached upon forest land and were now facing eviction. In case, the government implemented the Act, the people could be saved from harassment, he said.