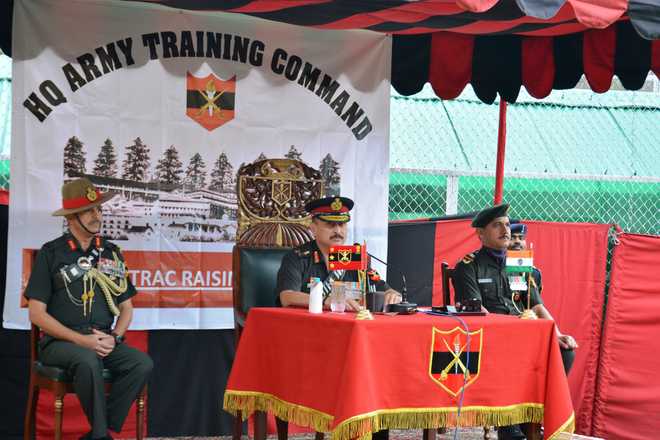 Lt Gen PC Thimmaya, GOC-in-C, ARTRAC, during the celebrations of its 29th Raising Day in Shimla on Tuesday. Tribune photo

A special Sainik Sammelan was organised in which Lt Gen PC Thimmaya, General Officer Commanding-in-Chief, Army Training Command, commended all ranks and the civilian staff for their dedication and urged them to maintain the highest professional standards.

He exhorted all ranks to put in sustained efforts towards propelling this great organisation further towards reaching the pinnacle of glory and advised them to be prepared to face the challenges ahead. A ‘Barakhana’ was organized for the troops on the same day.

Lt Gen PC Thimmaya highlighted the need to impart training on war gaming, simulation, artificial intelligence, cyber and space and stressed on the need for leadership training to be imparted to all ranks to keep pace with the changing battlefield milieu. He also presented outstanding individuals, including police officials, with commendation cards in appreciation for their outstanding contribution and devotion to duty.

The Army Training Command through its 32 training establishments spread all over the country imparts institutionalized training to Army personnel.