KULLU: The district administration, Kullu, has opened (13,050 feet) high Rohtang Pass for tourist activities in Himachal Pradesh today. A total of 1,200 vehicles will be allowed toward it daily in the coming days, except Tuesday, as this day is marked for maintenance of road toward the pass. 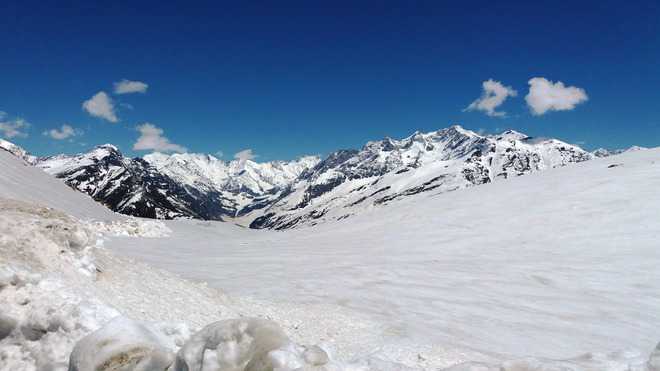 The district administration, Kullu, has opened (13,050 feet) high Rohtang Pass for tourist activities in Himachal Pradesh today. A total of 1,200 vehicles will be allowed toward it daily in the coming days, except Tuesday, as this day is marked for maintenance of road toward the pass.

Deputy Commissioner Kullu Yunus Khan today inaugurated the online permit facility for tourist vehicles, which is mandatory to ply the vehicles toward Rohtang Pass for tourism related activities. Permits can only be applied for the next two days from the current date.

According to National Green Tribunal (NGT) directions only 1,200 tourist vehicles will be allowed toward Rohtang Pass in a single day. Out of these, 800 vehicles would be petrol run, while 400 diesel run.

The permit will be available online on payment of Rs 550 and can be obtained on Google by inserted ‘Rohtang permit’. The permit costs Rs 500, while Rs 50 will be taken as congestion charges.

“In the morning hours between 6am to 9am 400 petrol and 200 diesel vehicles having permits will be allowed toward Rohtang Pass, while between 9:30 am and 12pm the same number of vehicles will be allowed for tourism purpose”, the Deputy Commissioner elaborated.

However, the tourists heading toward Lahaul Spiti and Leh Ladakh will not be charged any amount, except Rs 50 as congestion charges, to provide the permit. The amount for heavy vehicles is Rs 100.

To foil any mischief, the district administration has decided to verify vehicles at Koksar and Keylong, which will have the permit to visit Lahaul.

“If any taxi driver violates the order the action will be taken and vehicle will be blacklisted to ply on that route”, said the Deputy Commissioner.

However, the vehicles of the residents of Lahaul Spiti and Pangi region are allowed to ply on the route and cross Rohtang Pass without paying any congestion charges. Apart from this, a POS (point of sale) machine has been set up at green tax barrier in Manali, where cashless transaction facility will be available and tourist can swipe their card to pay the green tax.