MANDI: With the Rohtang Pass and Baralacha La receiving mild snowfall on Friday, ride is going to be riskier on the Manali-Leh highway in the coming days. 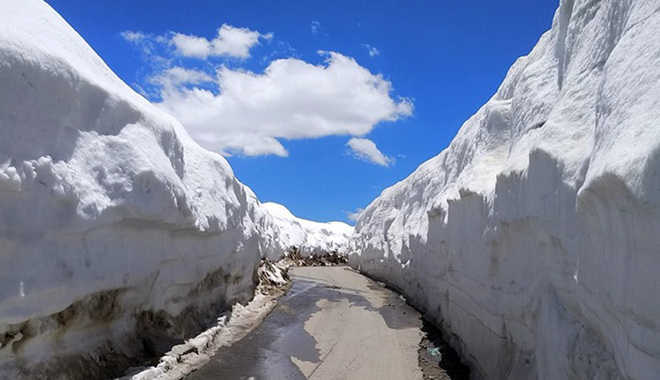 The Manali-Leh highway crosses through the Rohtang Pass and Baralacha La in Lahaul-Spiti.

With the Rohtang Pass and Baralacha La receiving mild snowfall on Friday, ride is going to be riskier on the Manali-Leh highway in the coming days.

The Manali-Leh highway crosses through the Rohtang Pass and Baralacha La in Lahaul-Spiti.

With the temperature plummeting, the road has become slippery due to frost. The Himachal Road Transport Corporation (HRTC) has stopped its bus service on the Manali-Leh highway and the district police have also removed their check post from Sarchu.

The Lahaul-Spiti police set up a rescue post at Sarchu every year to keep a tab on the movement of vehicles from Himachal to Leh or those entering from the Leh side.

Sarchu is a disputed land as the state government has claimed encroachment by Jammu and Kashmir on it. The matter is being looked into by the Central Government. In the absence of a police post, travellers won’t have an easy access and will get no help in times of need.

However, Keylong SDM Amar Singh Negi said: “After September 15, the police post is removed from the area. Travellers should be cautious while commuting on the route.”

Regional Manager of the HRTC depot at Keylong Mangal Chand Manepa said the bus service had been stopped on the Manali-Leh highway in view of public safety. Last year on September 21 and 22, sudden snowfall had left over 4,000 tourists stranded in Lahaul-Spiti.

The police also removed their check post from the Chandertal lake, which is also prone to heavy snowfall.

George Floyd death: Trump threatens to use military to quell violent protests across US

Tension in at least 140 cities across America