SHIMLA: The use of coal for running a steam engine by the Railways, especially for foreign tourists, is posing a threat to forests, with a major fire breaking out in pine forests under Anandpur panchayat near Shoghi yesterday. 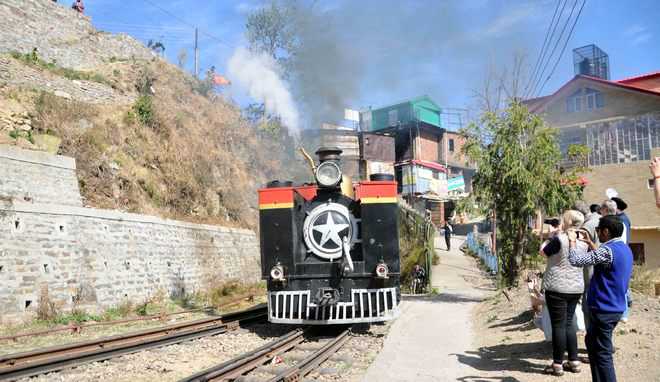 The use of coal for running a steam engine by the Railways, especially for foreign tourists, is posing a threat to forests, with a major fire breaking out in pine forests under Anandpur panchayat near Shoghi yesterday.

Villagers are up in arms against the use of coal by the Railways, which has become a cause for the outbreak of fire in the forests.

Led by Mahender Kumar, pradhan of Anandpur, the villagers have made up their mind to lodge an FIR and take up the matter with the Railway Minister also.

“The sparks coming along with the steam and burning embers falling out caused a forest fire even in 2016 and yesterday again, a major fire broke out,” said Mahender Kumar. The fire caused a lot of damage to the forest, wildlife and the grass that the villagers used as fodder.

The steam engine runs occasionally on the UNESCO World Heritage Track between Kalka-Shimla. With the charges for it being quite high, it plies mostly for group of foreign tourists, who like to visit the erstwhile summer capital of the British.

The Forest Department too has taken a serious note of the forest fire. “We will issue a notice to the Railways and give it a week’s time to reply to it. We cannot allow any damage to the forest on account of callousness by anyone,” said Amit Sharma, Divisional Forest Officer (DFO).

The villagers rued that the fire caused pollution with thick smoke coming out for days together.

“We are not opposing the running of the steam engine but the Railways must take some precaution to ensure that it does not result in a forest fire,” said Mahender Kumar.

He said the Railways should clear the area adjacent to the track to remove the highly inflammable dry pine needles before the steam engine was to be run.

He also felt that a water tanker could be used to spray water immediately after the engine moved to ensure that fire did not erupt. There were several villages in the vicinity of the track.

“We will pass a resolution to seek the intervention of the Railway Minister and the state government so that necessary steps can be taken to avert forest fire,” said a local Ashok Sharma.