In a much-needed relief to the Forest Department, 25 high specific density pellet units are being set up across the state to deal with the problem of inflammable pine needles, which cause havoc every summer. These units will facilitate their use as a fuel. 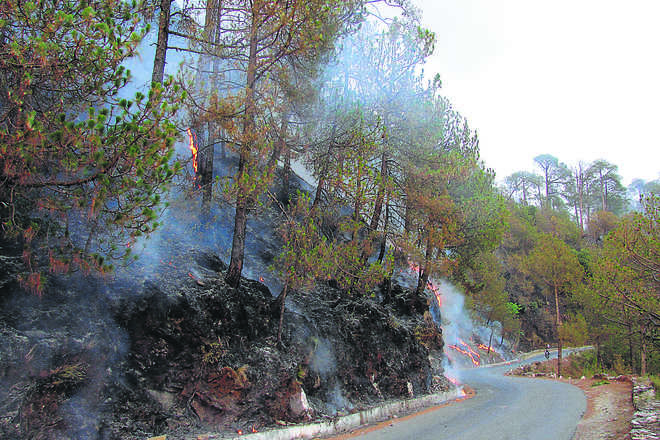 A fire on a hill along a road.

In a much-needed relief to the Forest Department, 25 high specific density pellet units are being set up across the state to deal with the problem of inflammable pine needles, which cause havoc every summer. These units will facilitate their use as a fuel.

Having high calorific value of 4,915 Kcal per kg, these pellets have a minimum ash content of 5.5 per cent, while the oxygen content is as high as 46 per cent.

Since it reduces methane and carbon dioxide emissions as well as the use of green house gases, which are responsible for climate change, they have been pegged as an environmentally safe option.

They can be used as fuel in various cement plants as well as in boilers by several industrial units of the state.

Principal Chief Conservator of Forests (PCCF), Ajay Kumar, said: “Twentyfive units shall be set up in seven forest divisions, which include five each in Mandi and Solan and three each in Hamirpur, Jogindernagar, Nahan and Palampur, as these areas face a large number of forest fires every year. The Divisional Forest Officers are inviting proposals for setting up such units and the process will be facilitated by Dr Arti Kashyap, Associate Professor, IIT, Mandi.”

A proposal will also be sent to the secretary, Rural Development and Panchayati Raj for the inclusion of pine needle collection followed by planting as a permissible activity under the Mahatma Gandhi National Rural Employment Guarantee Scheme (MGNREGS). This will ensure that people who collect pine needles are suitably remunerated.

Apart from this, the managing director, HP State Forest Development Corporation Limited will also be requested to install two to three such units on a pilot basis in chir pine areas under the forest working divisions to popularise their use, as it will help curb the problem of forest fires.

Pine needles shed on the forest floor from April to June and they hinder the growth of grass as air flow is blocked. Being highly inflammable, they catch fire instantly during the summer season and cause threat to biodiversity, environment as well as local population.

As many as five people have lost their lives and as many injured, while fire-fighting operations were on last year, thus necessitating the need to find a lasting solution for the safe disposal of pine needles. A maximum of 1,906 cases were reported in 2009 in the last one decade in the state, which involving 248.50 sq km area.

The gravity of the problem was illustrated from the fact that Chir (pine) forests are found in 26 forest divisions out of a total of 43 territorial and wildlife divisions in the state. Based on the frequency of occurrence of forest-fire incidents, 339 out of a total of 2,026 forest beats are rated as highly sensitive. A majority of the forest fires in the state comprise ground fires.

Little success in the past

Though a plethora of measures have been taken to prevent forest fires, the success has been limited, as careless human behaviour causes such fires. Fire watchers are engaged in the fire season to help check such incidents and as much as Rs 3.5 crore were spent last year alone on this initiative. The state has an extensive 2,750 km of fire lines, where the inflammable pine needles pile up every summer season.

The production cost of the briquette has been worked out to be Rs 4.5 per kg by a team of experts from IIT Mandi, who have set up a working unit, while the total manufacturing cost has been worked out to be Rs 4,500 per ton. Since the state government will provide 50 per cent subsidy on setting up these units with a maximum assistance of Rs 25 lakh, it can also generate self-employment ventures for the youth, said PCCF Ajay Kumar, adding that the collection of pine needles can be undertaken by yuvak mandals and local mahila mandals as well.

Pine pellets can also be used as a cooking fuel in restaurants and dhabas as well. If successful, the venture can help in providing a lasting solution to the Forest Department for the scientific disposal of the inflammable pine needles as containing forest fires has become a major challenge for officials.