MOHALI: Amid a ruckus by Shiromani Akali Dal (SAD) and Congress councillors over taking credit for development works in the town, the Municipal Corporation (MC) today gave its nod to the detailed project report (DPR) and detailed notice inviting tenders (DNIT) for the augmentation and rehabilitation of the sewerage in the town. 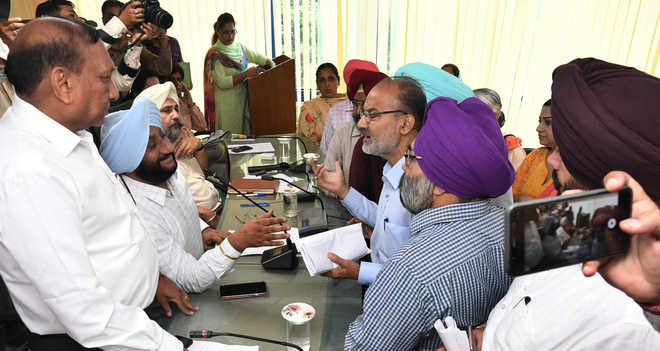 Amid a ruckus by Shiromani Akali Dal (SAD) and Congress councillors over taking credit for development works in the town, the Municipal Corporation (MC) today gave its nod to the detailed project report (DPR) and detailed notice inviting tenders (DNIT) for the augmentation and rehabilitation of the sewerage in the town.

The House accorded its approval to the DPR and DNIT for the work of augmentation and rehabilitation of almost four-decade-old sewerage system in the town. Under the project, nearly 9 km-long main outfall sewer pipeline will be laid. “The project report in this regard has already been approved by the State High Power Steering Committee. The committee has also approved Rs 21.90 crore for the project being carried out under the AMRUT scheme,” said Mayor Kulwant Singh.

He added that soon, all formalities in this connection would be completed as the time limit for the completion of work is nine months.

Besides, the House revoked its February 1 decision to increase the fine from Rs 5,000 to Rs 20,000 imposed on the owners of cattle found roaming in the town. A three-member committee has been constituted to keep a check on affairs at the local ‘gaushala’.

“Ever since the quantum of the fine was increased, the corporation officials did not impose it on anyone so far even as 332 animals have been caught during the period of six months. This showed that the MC officials did not catch any milch cow/buffalo,” said HS Channa, a local councillor.

On the other hand, MC officials maintained that the fine amount was high and the owners of the animals being caught by them were not showing interest in paying it to get back their livestock. “As a result, the ‘gaushala’ is being overburdened. The financial burden in this connection is being borne by the corporation. Therefore, we decided to roll back the hike in the fine,” said MC Commissioner Bhupinder Singh.

The MC House meeting started amid a ruckus by SAD and Congress councillors. Akali Dal councillors Paramjit Singh Kahlon and RP Sharma criticised Punjab Health Minister and local MLA Balbir Singh Sidhu over taking credit for all development works being carried out in Mohali. “By making all such claims, Sidhu has been misleading local people,” alleged the councillors. At this, Congress councillors left their seats and threatened to stage a walkout. Mayor Kulwant Singh pacified all councillors, saying that instead of indulging in a credit war, let local residents judge the facts.