Forty five years ago, most of us never thought twice about filling the fuel tanks of our vehicles. 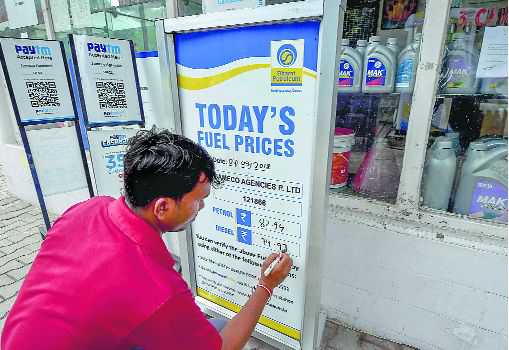 Rising oil price: India is reeling under its economic and political ramifications.

Forty five years ago, most of us never thought twice about filling the fuel tanks of our vehicles. A full tank of my Vespa scooter cost me Rs 6. My parents' Ambassador car needed Rs 50 to be brimful.  Fuel was the last of our worries and we consumed it as if the good times would never end. They did, on October 6, 1973, the day of Yom Kippur, the holy day of atonement of sins by the Jews. President Anwar Sadat of Egypt launched one of the best ever conceived, planned and coordinated military offensives in history, into his own territory. That territory was then held by Israelis along the Suez Canal front with the entire Sinai under them, having captured it in the lightning offensive of the Six Day War of June 1967. That Sadat's offensive floundered at the altar of execution, the bane of the planner, is a different story. Importantly, it upset the breeze of a life we lived in those times. Prices of fuel shot up and very soon my scooter's full tank was costing me  Rs17; that's an increase of three and a half times almost overnight. Imagine if petrol were to suddenly cost you Rs 275 a litre! A heart-stopping development for most of us.

What's the connection between Sadat's Yom Kippur war of October, 1973 and oil prices? That's what I will endeavour to explain in brief.

The Yom Kippur war: The conflict itself is one of the most studied and analysed conflicts of the Cold War period. It stood out for three things in terms of military technology. One, the first serious use of anti-tank guided missiles (ATGMs) in the mechanised battlefield, the SS 11B1 and the shoulder fired Malutka of the Soviet family and the American TOW (developed in 1970) which worsted the Israeli, Egyptian and Syrian armoured assaults in the war. Two, was the use  of Surface to Air Guided missiles (SAM6 and shoulder fired SAM7, again of the Soviet family). The third was the first demonstrated employment of the T-72 tank and the BMP-1, both iconic combat vehicles of the Soviet era.

Anwar Sadat put together a beguiling plan to deceive the ever-prepared Israeli armed forces and achieved almost total surprise. A young Egyptian military engineer developed a method of hosing down the high banks of the Suez Canal to provide access to Egyptian bridging and mechanised war fighting material even as hordes of Egyptian infantrymen with ATGMs went rushing across the canal and fanned into the desert to take on the Israeli armoured counter-attacks. SAM launchers were also rushed over the bridges to their pre-designated sites and kept at bay the attacking Israeli air force, thus creating a 10-km air defence umbrella. Despite the early success, the Egyptians floundered as the plan desisted from further ingress, diluting into a defensive holding action with the canal behind the Egyptians. In the end, the Egyptians were roundly defeated due to the massive airlift of state-of-the-art military equipment by the US to support Israel; TOW missiles were deployed from the airfields directly into action.

The connection with the oil crisis: Arab oil producers seething at the western support to Israel imposed an embargo on any nation seen to be with Israel. The decision to boycott and punish the US and the West led to the price of crude to rise from $3 per barrel to $12. The price of petrol all over the world shot up drastically, making transport more expensive. The demonstrated power of energy and its crunching effect on international economics first came to be realised in the wake of this embargo.

It sent the international political stock of countries such as Saudi Arabia, Iraq and Iran much higher. The Organisation of Petroleum Exporting Countries (OPEC) was founded in 1960 by Saudi Arabia, Iran, Iraq, Kuwait, and Venezuela with the principal objective of raising the price of oil. Others soon joined them. For the first decade, OPEC had little impact on the price of oil, but by the early 70s, the demand for oil was increasing. Japanese and US car production was exponentially increasing and although the world was in the Cold War mode, a period of peace in the troubled 20th century was ensuring better quality of life for people. That meant an increasing dependency on travel as cities expanded along with motorised transportation and international travel. OPEC did not succeed in increasing the price of oil even till the early 70s. The Yom Kippur War came as a trigger and OPEC suddenly acquired a larger political clout. It threatened to also cut back production to create an oil crisis, sensing an opportune moment.

Spur to alternative energies:  Although US Secretary of State Henry Kissinger did manage to negotiate with the Arabs on the availability of oil for the US, this crisis effectively spurred the world towards greater development of alternative energies and localisation of energy resources. The UK, for instance, developed its North Sea facility to eventually become an oil exporter. The US research led to the discovery and development of shale gas, making it self-sufficient and no longer dependent on Middle Eastern oil. However, there can be no denying that the oil boom, which later tapered, led to the rise of the Gulf countries, some of them very appropriately as trading and business development hubs. The flocking of the 7.5 million Indian diaspora to these countries began just after these developments. The Persian Gulf received a strategic boost out of proportion to its geostrategic location, which multiplied further during the disastrous Iran-Iraq war of the 80s and the two Gulf Wars.

India’s struggle: China and India's economic boost through the 90s and the early millennium was courtesy the dependence on Middle Eastern oil. That situation has hardly changed as both struggle with alternative energies; renewable resources such as solar and wind have not sufficiently made a dent, although steps are afoot. Electric surface transport resources are developing; electric air transportation seems yet afar.

Unless a comprehensive shift to alternate sources takes place, it is unlikely that the geopolitical and geostrategic importance of the Middle East can wane, the US independence in energy notwithstanding. Already, India is reeling under the weight of rising fuel prices with social, economic and political ramifications.

It all goes back to October 6, 1973 when Anwar Sadat decided to restore the self-esteem of the Egyptian armed forces and the nation. Today is the 45th anniversary of that event.