How the making of Harjeeta unmade Harjeet

CHANDIGARH:His impromptu and unabated performance of bhangra to the beats of the dhols playing in the stands after the semifinal win over Australia; the way he held the trophy tightly to his chest and couldn’t stop kissing it all through the Indian team’s victory lap — Harjeet Singh’s every action at hockey’s Junior World Cup in Lucknow became a memory for a lifetime. 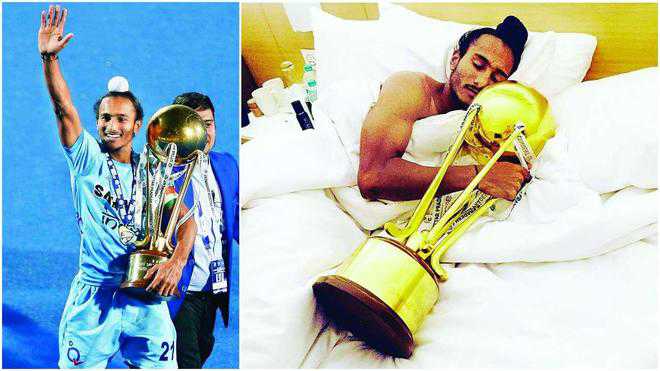 Harjeet Singh waves to the crowd during the victory lap to celebrate the 2016 Junior World Cup triumph; Harjeet with the trophy in his hotel room. file

His impromptu and unabated performance of bhangra to the beats of the dhols playing in the stands after the semifinal win over Australia; the way he held the trophy tightly to his chest and couldn’t stop kissing it all through the Indian team’s victory lap — Harjeet Singh’s every action at hockey’s Junior World Cup in Lucknow became a memory for a lifetime. The captain of the team, Harjeet was unquestionably the leader and the face of the India team that won the World Cup in December 2016.

He was a beacon of hope for the Indian fans, exuding unequivocal confidence that India were going to become the champions. He was the heart of the Indian team’s midfield — a live wire on the field about whom former high performance director Roelant Oltmans couldn’t stop raving.

“Wait and watch, this team will bring many more trophies,” were Harjeet’s famous words at the press conference after India’s victory in the final.

The next day, a photograph of Harjeet cuddling the trophy in his hotel bed, as if it were a child’s soft toy, appeared on social media. Over the next few weeks, Harjeet’s words and the photo swept the nation — it filled the nation with hope that India could regain its hockey glory.

Three years later, that photograph has again gone viral — this time, though, only as a reference. Next to his photo is the poster of the 2018 Punjabi movie Harjeeta. The poster recreated that ‘iconic’ photograph, with a bare-chested Ammy Virk, the movie’s lead, lying in the bed with the trophy. The movie, based on Harjeet’s journey from a down-on-his-luck boy to the champion of the world, was adjudged the best Punjabi film in the National Film Awards on Friday.

At first, Harjeet, who belongs to Niholika village near Kurali, didn’t even know if it was a big deal. “I didn’t even know about the award or how big an honour it was,” Harjeet said from Bengaluru, where he is playing a tournament. “Slowly it hit me, and I was filled with the feeling of pride. I know how hard everyone worked on the movie and how hard Ammy Virk worked for two years,” he added.

Harjeet’s hockey journey began in Kurali in 2004 when he joined Gopal Hockey Academy. But Harjeet, the son of a truck driver, faced many hurdles in pursuing his dream, the lack of funds being the main one. However, his hard work got him into the state’s top hockey academy, Surjeet Academy in Jalandhar, in 2008, and the youngster’s road to glory was fast-tracked. He was among the youngest to make the cut for the junior national team, and in 2014, as an 18-year-old, he was named the best player at the Sultan of Johor Cup in Malaysia. He became the poster-boy for one of Indian hockey’s greatest successes in 2016. The movie further spread his stardom. “The movie made a huge difference to my life. Before it, I was known only because of hockey. But now, many people, from different fields, know me,” Harjeet said.

Three years later, his photo with the trophy remains an inspiration for youngsters to follow their dreams. In the hockey circles, though, it doesn’t inspire hope but a feeling of what could have been. In the post-World Cup euphoria, Harjeet emerged as one of the biggest finds for the future. Oltmans, then the senior team coach, wasted no time in throwing Harjeet in the deep end, the senior international hockey circuit. Many great talents have either struggled or failed to make the transition from junior to senior hockey. Harjeet struggled as well. But there was huge scope for improvement. Until the movie offer came his way. Though Harjeet “got all the permissions” from the coach and federation, he failed to realise how the movie would affect his game. As he spent much of his time working with the filmmakers, Harjeet’s game suffered. “You can’t help giving most of your time to a project like this. It was based on my life,” Harjeet said. “I didn’t even realise that my individual training time was being affected.”

Road back via Jalandhar, Netherlands

He not only lost his place in the team but also failed to make it to the national camp — his last being the camp for the 2018 Commonwealth Games. Heartbroken, Harjeet decided to go back to the basics. “I have been training at Surjit Academy for over a year,” said Harjeet, who is an employee of Bharat Petroleum.

Avtar Singh, a coach at the academy, said that Harjeet got over the disappointment and worked hard on his fitness and game. The hard work paid off — after being in the wilderness for over a year, Harjeet was recalled for the 60-player national camp in April this year. But he couldn’t make the cut when the group was trimmed to 33. This time, it hurt even more. “A player’s level falls but you can get it back up. I had worked hard and was confident… I deserved to get into the 33-member camp. I am disappointed but I can only keep working harder,” Harjeet said.

Harjeet has got a “great opportunity” to get back into the reckoning for the national team. The 23-year-old has been signed by a top club in the Netherlands, HGC. “It is a big step for me. I will train and play with some of the best players in Europe,” Harjeet said.

There may yet be more photos of Harjeet with a trophy in his arms.