India must go all out to achieve 2030 target

Human activities are reducing Earth’s life-support capacity. The ecological imbalance is manifesting itself in the form of well-established trends of air pollution, falling water table, shrinking forests, polluted rivers and climate change. These phenomena, besides affecting air and water quality, have rendered land degraded both for biotic and abiotic resources. 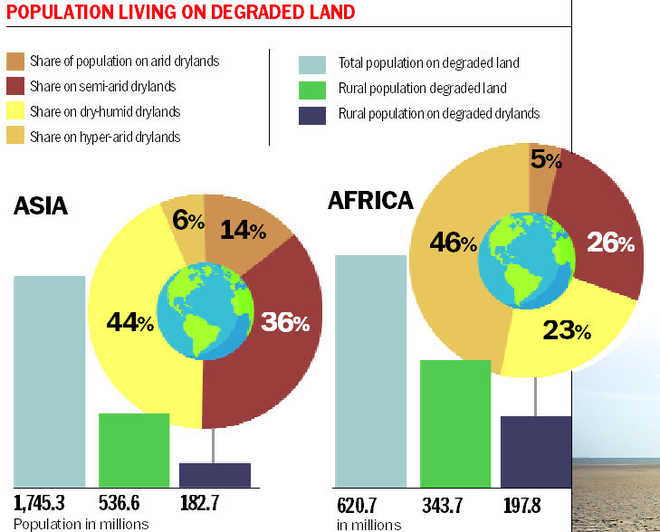 Human activities are reducing Earth’s life-support capacity. The ecological imbalance is manifesting itself in the form of well-established trends of air pollution, falling water table, shrinking forests, polluted rivers and climate change. These phenomena, besides affecting air and water quality, have rendered land degraded both for biotic and abiotic resources.

About 2 billion hectares of land, an area three times the size of India, is degraded in the world. The UN, with the participation of 196 countries, set up the United Nations Convention to Combat Desertification (UNCCD) in 1994 to deal with land degradation issues. India is a signatory to this body and has committed itself to the Sustainable Development Goals (SDG) target 15.3 to achieve Land Degradation Neutrality (LDN) by 2030. LDN is an innovative land use and management approach where further land degradation is prevented and already degraded land is restored.

India’s land area is undergoing degradation due to deforestation, overgrazing, unsustainable land use practices, expansion of agriculture and groundwater depletion. According to The Energy and Resource Institute (TERI), economic losses equivalent to 2.5% of its GDP annually are due to land degradation; the cost of reclaiming land through land management interventions could be far less than not taking action. India has increased its targeted area for the restoration of degraded land from 21 million hectares to 26 million hectares by 2030, as per the announcement made by Prime Minister Narendra Modi at the recent Conference of Parties (COP14) of the UNCCD. The meeting ended with the New Delhi Declaration containing processes and mechanisms to deal with land degradation and its associated biodiversity and climate change issues.

Land restoration is one of the cheapest solutions to address the global crisis of climate change and biodiversity loss. The action programme in India for the achievement of LDN by 2030 must take into account transformative efforts to avoid, reduce and reverse land degradation through socially equitable means. The first step is to initiate action to avoid any activity or process leading to land degradation. Nature-based solutions such as conservation of forests, practising organic agriculture, utilisation of land as per land use delineation and conservation of water bodies should get priority as these are locally acceptable and adaptable.

These measures need to be followed by the treatment of degraded areas by supporting plant life depending upon the use to which land can be put to, be it agriculture, horticulture, pasture/grassland or forestry. The ecosystems so developed after such treatment must be environmentally and ecologically sound and aid in generating eco-services, storage of carbon dioxide and mitigating climate change. The rehabilitation of land use must help in improving biodiversity, conservation of water and mitigating disasters such as floods, droughts, landslides, forest fires and flash floods.

India’s targets would be better achieved if schemes on integrated land and water management such as catchment area treatment, watershed management, soil and water conservation and river basin management are included as well. Implementation of such an integrated management would help in biodiversity conservation, livelihood generation, climate change mitigation and reclamation of land resources. The rehabilitated lands would lead to increased agricultural and forest productivity, making available green products for improving cash flow and enhanced GDP to meet the targets set by the country earlier than envisaged.

The author is former Principal Chief Conservator of Forests, HP