J&K mobile services ‘within a day or two’

SRINAGAR:After withdrawing the advisory for tourists, the Jammu and Kashmir Government is all set to restore the postpaid mobile telecommunication in the Valley. 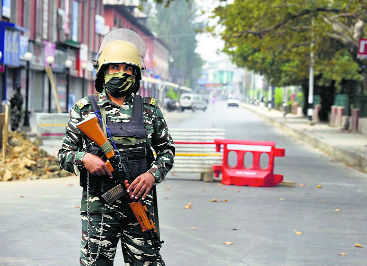 After withdrawing the advisory for tourists, the Jammu and Kashmir Government is all set to restore the postpaid mobile telecommunication in the Valley.

J&K may restore the BSNL postpaid mobile phone services in coming days. A decision has been taken in this regard and only dates have to be decided, government sources privy to the development said.

“The BSNL postpaid mobile phone services will be restored in coming days,” the sources said. “Delhi has also agreed to it and the mobile telecommunication may be restored on Wednesday or Thursday.

Only if something very drastic happens, it may get delayed,” they said.

Hours ahead of the revocation of special status to J&K on August 5, the government suspended the entire communication anticipating a massive law and order situation in the Valley. The government eased restrictions on the communication blockade days after by restoring the landline telephony in a phased manner. The incoming facility on Airtel postpaid connections was restored in frontier Kupwara district. The crippling communication blockade for over two months has left every Kashmiri family in pain.

There has been a severe criticism of the government over the communication blockade. The J&K Government has argued that “provocation from across the border” is hampering the restoration of mobile phone services.

Sources said the government would slowly restore the postpaid phones of other telecom companies. J&K had suggested New Delhi to restore mobile phones around last month, but the decision was reportedly vetoed as the UN General Assembly session was around. Apart from hitting the normal lives, the communication blockade has also slowed down the anti-militancy campaign.

Sources said the government would first restore BSNL postpaid mobile phone services in coming days. If all goes well, services of other telecom companies too would be restored