SRINAGAR:The Jammu and Kashmir administration on Tuesday said it hoped there would be more relaxations in the security restrictions after the dress rehearsal for the August 15 Independence Day celebrations conclude in various districts. 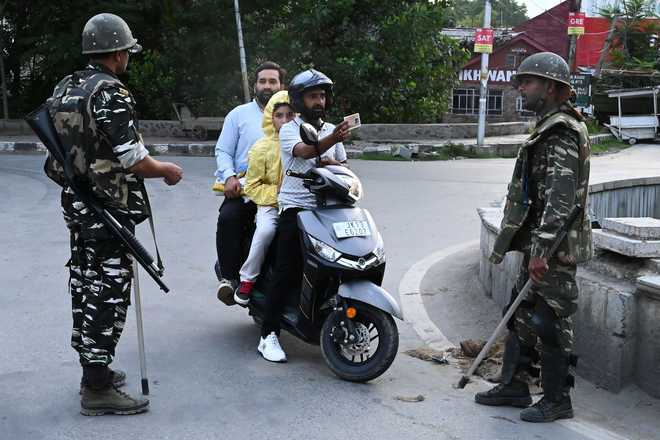 A motorist shows his identity card to security personnel after being stopped for questioning at a roadblock during a lockdown in Srinagar on Saturday. AFP photo

Srinagar, August 13
The Jammu and Kashmir administration on Tuesday said it hoped there would be more relaxations in the security restrictions after the dress rehearsal for the August 15 Independence Day celebrations conclude in various districts.
Principal Secretary Rohit Kansal told a press conference here that while prohibitory conditions were relaxed in various parts of Kashmir, the Jammu region was "almost entirely" free of restrictions.
"Restrictions, however, do continue in parts of Kashmir," he said.
"We are hopeful that once the full dress rehearsals for Independence Day being carried out in various districts of
Jammu and Kashmir and Ladakh conclude, there will be further relaxations," he added.
Kansal said the administration was hopeful that Independence Day celebrations would be carried out in a "grand and benefitting manner" in all parts of the state.
The security clampdown has been imposed after the Union government revoked Article 370 of the Constitution that gave a special status to the state on August 5 and said the state would be bifurcated into two Union territories—Jammu and Kashmir and Ladakh.
Kansal said the administration was following the overall policy of "relaxation and easing out" in all parts of the state and the Eid celebrations and prayers were peaceful on Monday.
He added that there was a "constant endeavour to ensure that people are not obstructed and are facilitated in every
possible way".
As far as the issue of communication was concerned, 300 public points were set up for the locals, from where they could speak to their dear ones, and over 5,000 calls were made in one day, the principal secretary said.
He added that medical services of all kinds were continuing "normally and unhindered" and the apprehensions in this context were not true.
Routine OPDs, admissions, surgical procedures were going on, Kansal said, adding that all kinds of normal and emergency medicines were in adequate supply.
Last week, 13,500 OPDs took place in Srinagar district, while there were 1,400 admissions and 600 procedures of all kinds, he said.
Kansal said the national highway was functioning normally and over 100 heavy vehicles, trucks carrying LPG cylinders, oil trucks and about 1,500 light motor vehicles and buses had moved over the last 24 hours.
"The flight operations are normal too," he added.
Asked about the government's response over some propaganda material being circulated on social media platforms like Twitter, Kansal said, "Due cognisance has been taken of all the fake handles and of any items that create disaffection and it is being tackled at the appropriate levels legally, procedurally and through appropriate measures.
"Whenever our attention is drawn to any fake accounts or any attempts to spread disaffection or peddle misinformation or create mischief, they are being dealt with procedurally, legally and through all available measures with the government."
Asked by reporters about the proposed plans for unfurling the tricolour on August 15 at various places in the state, including at Lal Chowk here, Kansal said the occasion would be celebrated with respect and grandeur.
"Independence Day celebrations have a certain system. It is a national festival and it will be celebrated with respect and grandeur. I have nothing to say about specific individuals," he said.
The principal secretary said some arrests were made following a local assessment of the situation.
However, a senior official in the administration who did not want to be named said that restrictions on movement and communications could continue for some time.
The state administration would decide about when to lift restrictions and release political leaders such as former chief ministers Omar Abdullah and Mehbooba Mufti from preventive detention only after assessing the ground situation.
State administration put several political leaders, including Abdullah and Mufti, under detention as part of its "precautionary measures".
"If the trade-off is between inconvenience and loss of life, what should we choose? However, the administration is aware of the difficulties being faced by people and trying to minimising inconvenience. Any such decision will be taken by the local administration," the official said. PTI
SHARE ARTICLE