SRINAGAR/JAMMU:The second phase of voting for two seats in Jammu and Kashmir — Udhampur-Doda, one of the two constituencies of Jammu division; and Srinagar, one of the three constituencies in the Valley — ended on a peaceful note with a turnout of 43. 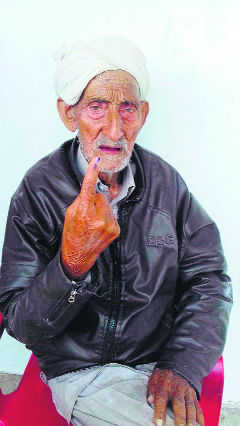 While Udhampur-Doda constituency saw brisk voting, Srinagar recorded one of its lowest-ever turnouts.

In Srinagar constituency, which recorded 14.8 per cent voting, only one of the 15 Assembly segments recorded above 30 per cent turnout. The turnout in Srinagar district was a dismal 7.96 per cent.

The two constituencies have a total electorate of 29.60 lakh with 12 candidates each in the fray. Two high-profile contestants — Minister of State (MoS) in PMO Jitendra Singh and National Conference president Farooq Abdullah — are in the fray for the two seats.

Singh, the incumbent parliamentarian from Udhampur, is seeking a second term, while Abdullah, a three-time former Chief Minister and incumbent MP, is contesting for his fourth LS term from Srinagar.

Srinagar: As many as 90 polling booths, mostly in downtown city, saw no voting for the Srinagar LS seat. PTI