RAJOURI: Heavy mortar shelling from across the border killed at least 15-20 domestic animals and damaged many houses in the Balakot sector in Poonch late last night. 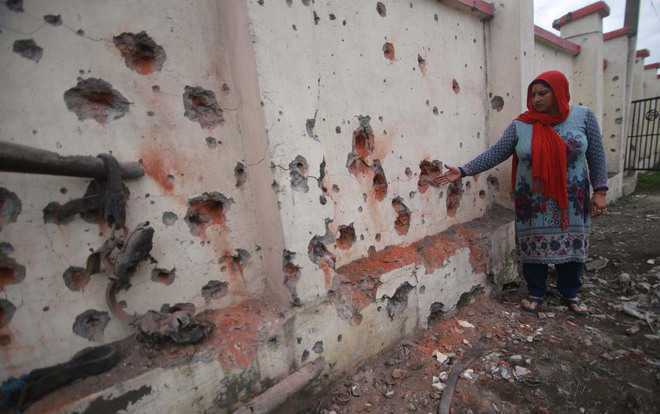 Heavy mortar shelling from across the border killed at least 15-20 domestic animals and damaged many houses in the Balakot sector in Poonch late last night.

Schools along the LoC in the Balakot sector in Mendhar tehsil remained closed today.

“More than 15 domestic animals in forward Dabi village were killed in the Balakot sector. A team, including officials from the revenue, veterinary, health departments headed by the tehsildar, was rushed to the forward areas to assess the losses,” said Sahil Jandyal, Sub-Divisional Magistrate (SDM).

Several mortar shells landed near the house of Mohd Shabir, a resident of Dabi, whose family had a narrow escape.

At least 20 livestock of the family were killed when shells hit the animal sheds. Sahil Jandyal, SDM, said all schools along the LoC were closed today.

“The civil administration, with active support of the Army, has started looking for unexploded mortar shells so that these can be defused. Nine unexploded shells were defused three days ago,” said the SDM

The Pakistan army resorted to unprovoked heavy firing and mortar shelling at about midnight in the forward areas in the Balakot sector on Saturday which continued till 2 am.

Truce violation was also reported from the Nowshera sector between 8 and 10 pm on Saturday.

“The Pakistan army again resorted to unprovoked heavy firing and mortar shelling at about 9.45 am on Saturday in the Kirni and Shahpur sectors in Poonch district. Since Saturday evening, the Indian Army has been retaliating befittingly” said Lt-Col Davender Anand, PRO, Defence.

Four schools, including a higher secondary one, were also closed after the ceasefire violation in the Shahpur area.

“The administration must complete the bunkers on a priority basis as only 20 per cent bunkers have been made functional in the Balakot sector. Pakistan army has been targeting civil population intentionally to create terror,” said Ayaz Khan, Lamberdar, Balakot.

At the time of filing this report, the Pakistan army again resorted to heavy shelling in the area. The Army and civil movement has been stopped in the Balakot sector, said sources.

There was no report of any casualty during the exchange of fire between the two sides.

“The low-calibre firing, along with mortar shelling, started at 5 pm on Friday and continued till midnight at many villages along the LoC,” sources said. They added that the two armies had been frequently exchanging fire in Uri for the past 10 days.

After the abrogation of the special status of J&K on August 5, the Army says there have been frequent efforts by Pakistan to push militants into Kashmir. However, top Army officials maintain that these bids have been foiled.

Meanwhile, normal life remained hit for the 48th consecutive day in Kashmir. For the past one week, shops in some parts of the city open during the morning hours and many people can be seen thronging the stores to purchase essentials. Shops and business establishments continue to remain closed during the day in Kashmir. While the public transport remained off roads, private transport continues to operate in most parts of the Valley.

The police on Saturday claimed that they had arrested three persons in south Kashmir’s Pulwama district who were involved in threatening and intimidating locals by publishing posters. The three arrested were identified by the police as Showkat Mir of Kadalbal Pampore, Inayatulla Khan and Shabir Reshi, residents of Nagbal Laddoo

Initial investigations revealed that they were involved in the publication of threatening posters at Ladoo by proscribed terror outfit Jaish-e-Mohammad, a police spokesman said.