JAMMU: Age is no barrier for Surjeet Choudhary, a 58-year-old veteran athlete and an Inspector in the J&K Police, who has bagged three gold medals in the Indo-Bangladesh Masters Athletics Meet held at Jawahar Lal Nehru Stadium, New Delhi, from February 14 to 16. 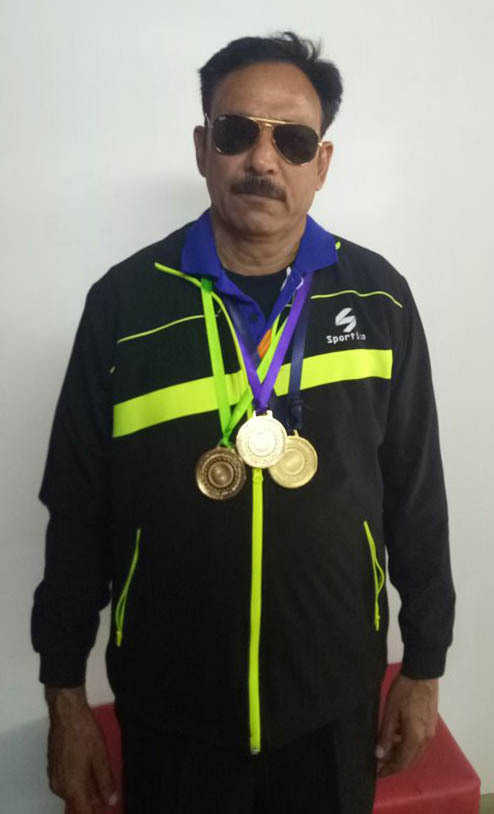 Age is no barrier for Surjeet Choudhary, a 58-year-old veteran athlete and an Inspector in the J&K Police, who has bagged three gold medals in the Indo-Bangladesh Masters Athletics Meet held at Jawahar Lal Nehru Stadium, New Delhi, from February 14 to 16. He was also declared the best athlete.

He was part of the J&K Veterans Athletics team that participated in the sporting event.

Hailing from Chohala, a small village in RS Pura, Surjeet had participated in various athletic events at the district, state and national level before joining the service in 1983.

“Ever since I started participating in athletic events, it was my dream to win medals at the national and international level. I joined the JK Police in 1985 and in 1989, I participated in the 38th All-India Police Games held at New Delhi from February 5 to 12,” Surjit told The Tribune.

“Though I was not able to win any medal, being part of the event motivated me to perform well further. In 2015, I got my first medal in the National Masters Athletic Championship held at Dharamsala in Himachal Pradesh,” he said.

“In 2017, I was pretty close to breaking the national record in the National Masters Athletic Championship. I clinched gold medal in long jump in that competition,” he said.

When asked about the secret behind his energy level at this age, Surjeet said, “Age is just a number if an individual wants to excel in any field. Passion is what keeps an individual keep going.”