RAJOURI: A soldier was killed at a forward post in the Poonch sector on Sunday when the Pakistan army resorted to unprovoked heavy shelling/firing. This was the sixth such death since July 1 in Poonch and Rajouri districts. 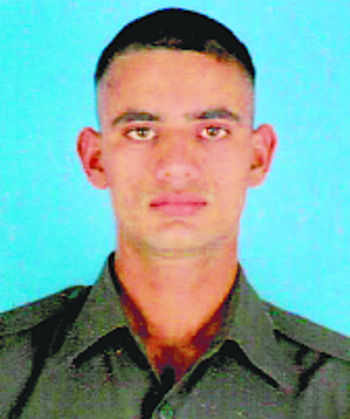 A soldier was killed at a forward post in the Poonch sector on Sunday when the Pakistan army resorted to unprovoked heavy shelling/firing. This was the sixth such death since July 1 in Poonch and Rajouri districts.

The martyr has been identified as 23-yeard-old Grenadier Hem Raj Jat. The soldier received critical splinter injuries and succumbed later.

“The martyr was a brave, motivated and a sincere soldier and the nation will remain indebted to him for the supreme sacrifice and devotion to duty. He is survived by his mother Dhaka Devi,” said Lt Col Devender Anand, Defence PRO. “The Army has responded befittingly, causing damage to major Pakistan army defences,” the PRO said.

The Army Chief had visited the forward locations to review the security situation and operational readiness on Saturday. Earlier, Naik Rajib Thapa (34) and Lance Naik Sandeep Thapa (35), both of Gorkha Rifles, were martyred on August 23 and August 17, respectively, along the LoC in the Nowshera sector in Rajouri district.

On August 20, Naik Ranjak Kumar was killed in Poonch district.Naik Krishan Lal and Rifleman Mohd Atif Shafi Pathan died in the Sunderbani sector of Rajouri on July 30 and 22.