At Internet kiosk in Valley, aspirants talk of hardships

SRINAGAR: For the 75th consecutive day on Saturday, the Internet services continued to remain blocked in Kashmir. 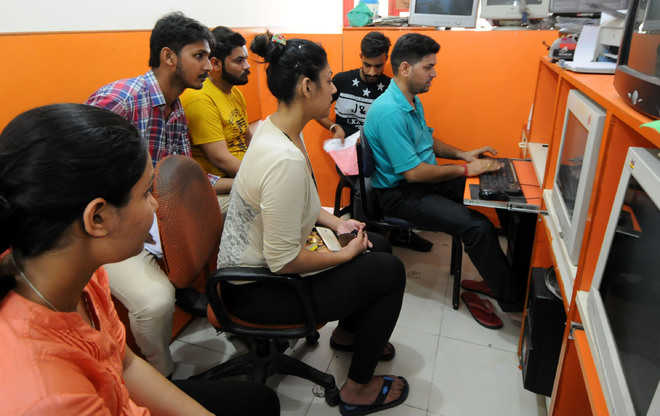 At one of the two Internet centres at the Tourist Reception Centre here — set up by the government to facilitate students, aspirants queued up to download examination forms, download hall tickets and apply for scholarships.

For the 75th consecutive day on Saturday, the Internet services continued to remain blocked in Kashmir. At one of the two Internet centres at the Tourist Reception Centre here — set up by the government to facilitate students, aspirants queued up to download examination forms, download hall tickets and apply for scholarships.

At the centre, a constant trickle of aspirants pours in everyday from as early as 7 am. They then have to put their name on a paper and state the purpose for using the Internet. The centre opens at 10 am and closes at 6 pm. Everyday hundreds of students and aspirants come to the centre, but with only three computers, some of them have to go back dejected.

“I have been coming to the centre for the past three days but have been unable to fill the scholarship forms. They are allowing those who are not even on the list. We met the Superintendent of Police concerned and told him what was happening at the centre,” said Mantasha, a resident of Srinagar.

Aspirants said the gag on the Internet was affecting them badly. Some of them said the deadlines for filing forms had expired. An aspirant said she had gone to the DC office four times to fill her scholarship form but was told to come the next time. “I had no option but to come to the Tourist Reception Centre.”

A security official at the gate said there were only three computers at the centre.

A doctor, who had to apply for the Medical Council of India exam, said, “This doesn’t happen anywhere that the Internet services remain barred. This is rare. In which state is the Internet blocked?”

By 1 pm on Saturday only aspirants till serial number 13 had used the Internet. There were 80 aspirants on the list.

Two students from the Sher-e-Kashmir University of Agricultural Sciences and Technology (SKUAST), Kashmir, said due to the Internet blockade, they had missed the last date for applying for the PhD entrance exam at Punjab Agricultural University. “We heard that the last date for filing of forms has been extended by a couple of days so we come to apply for it. Now we will also have to pay the last fees,” said Irtifa, a SKUAST student.

The Internet services were blocked by the government on August 4 evening. The Centre had scrapped the special status of the state on August 5.