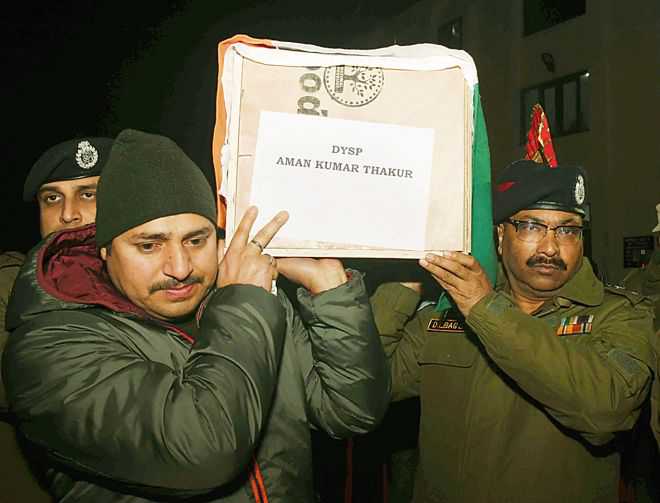 Deputy Superintendent of Police (DSP)  Aman Thakur, posted with the Special Operations Group, non-commissioned officer Havildar Sombir and three Jaish (JeM) militants were killed in a gunfight in Yaripora area of Kulgam district in South Kashmir today. A Major and a soldier were injured.

As men and women gathered at the encounter site, the security forces fired bullets, tear smoke shells and pellets to disperse the surging crowd, leaving at least seven injured. “We have shifted four of the injured to Srinagar — three with bullet wounds and one with a pellet injury in the eye,” a health official said.

The gunfight erupted at 2.15 pm in Tudigam village, minutes after a cordon and search operation was launched by a joint team of the security forces. The militants, hiding in a house, opened fire. A 2011-batch J&K Police Service officer, DSP Thakur was hit in the neck. He died while being flown to the Army hospital in Srinagar.

He hailed from Gogla district of Doda and is survived by his parents, wife and a six-year-old son.

Jammu and Kashmir DGP Dilbag Singh said: “We have lost a brave officer. A fighter, he led Sunday’s operation.”

Thakur was posted as the DSP (Operation) in Kulgam, a terrorist-infested area, two years ago. He was awarded the DGP’s Commendation Medal and Certificate for exemplary service only last month.