Geelani era fading as hardline Hurriyat gets a new chief

SRINAGAR/NEW DELHI: The elevation of Jamaat-e-Islami’s Mohammed Ashraf Sehrai as chief of the separatist Tehreek-e-Hurriyat indicates the waning influence of its founder Syed Ali Shah Geelani, who wanted his elder son to take over from him, say insiders in the Valley. 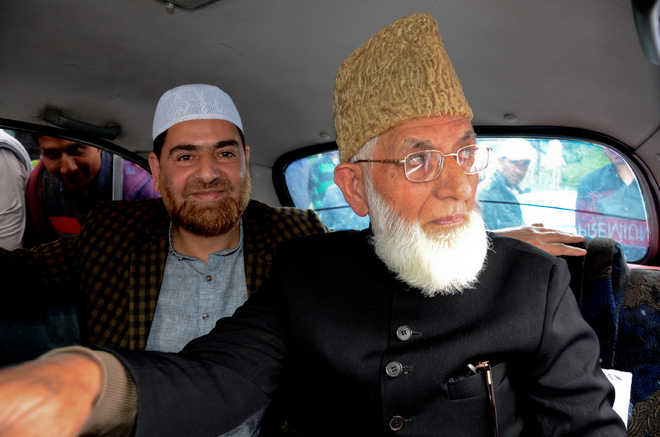 The elevation of Jamaat-e-Islami’s Mohammed Ashraf Sehrai as chief of the separatist Tehreek-e-Hurriyat indicates the waning influence of its founder Syed Ali Shah Geelani, who wanted his elder son to take over from him, say insiders in the Valley.

The move to appoint Sehrai, 74, as interim chairperson of the hardline faction of the separatist conglomerate Hurriyat Conference could well be the beginning of the end of the Geelani era in Kashmir’s separatist politics, said long time observers.

Geelani, the 88-year-old firebrand separatist leader who has been at the helm of affairs of the Tehreek-e-Hurriyat’s affairs since 2004 when it was founded, has been pressing for inclusion of his eldest son Nayeem Geelani as ‘rukn’ (member). But this was opposed by others in the group, insiders said.

He couldn’t negotiate a leadership position for his son-in-law Altaf Fantoosh either.

Sehrai, the general secretary of the Tehreek-e-Hurriyat, belongs to the frontier district of Kupwara and fought assembly elections in the state in 1987. He is a bachelor and a graduate from the Aligarh Muslim University (AMU).

A good orator, he had formed a coterie of loyalists within the Hurriyat and did not attend meetings called by Geelani, they said.

“A unanimous decision was taken in an extraordinary meeting to nominate Mohammad Ashraf Sehrai as interim chairman till the organisational elections. The elections will be held late this year,” the Tehreek-e-Hurriyat said in a statement, interpreted by analysts as a signal that Geelani would henceforth be a mere figurehead in the separatist movement.

Geelani, whose falling health is seen as one of the reasons for him stepping aside, had said in Srinagar yesterday that he had been under continuous house arrest for the past eight years and was not able to contribute to the movement as he should.

“So I willingly stepped down from the chairmanship and advise the ‘shoora’ (council) to arrange an alternative at the earliest,” the hardliner said.

The reality behind the statement is that the Sehrai camp successfully kept the next generation of the Geelani family away, sources in the Hurriyat said.

Adding to Geelani’s problems was the probe by the National Investigation Agency (NIA) into terror funding. His son-in-law was arrested last year and continues to be judicial custody.

His elder son Nayeem and the younger one, Naseem, have both been called for questioning by the NIA. — PTI

Himachal schools to open for Classes 9-12 on September 27