HOUSTON: Prime Minister Narendra Modi had a "special interaction" with a 17-member delegation of Kashmiri Pandits here and assured them of "building a new Kashmir" which would be for everyone. 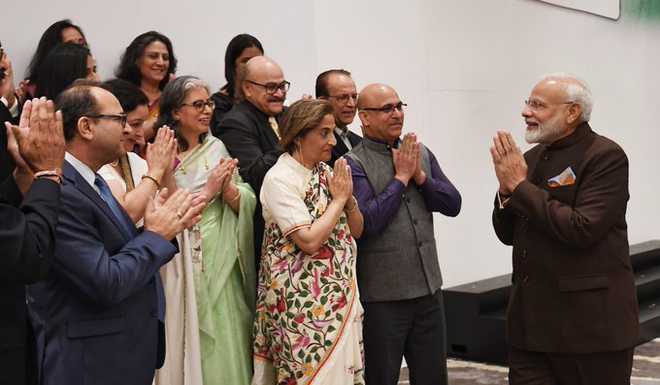 Houston, September 22
Prime Minister Narendra Modi had a "special interaction" with a 17-member delegation of Kashmiri Pandits here and assured them of "building a new Kashmir" which would be for everyone.
The delegation, which included Kashmiri Pandits from across the US, met Prime Minister Modi on his arrival in Houston as part as part of his week-long visit to the US.
"Kashmir mein naee hava bah rahee hai (New winds are blowing in Kashmir) and we will all build a new Kashmir together that will be for everyone," he told the delegation.
The Indian government on August 5 revoked the special status given to Jammu and Kashmir and bifurcated it into two union territories.
Modi also thanked the community for their patience for over 30 years.
"I had a special interaction with Kashmiri Pandits in Houston," Prime Minister Modi later tweeted.
Earlier, MEA Spokesperson Raveesh Kumar tweeted that the Kashmiri Pandits expressed support for the steps taken by the Indian government for the progress of India.
"In Houston, a delegation of the Kashmiri Pandit community met the Prime Minister. They unequivocally supported the steps being taken for the progress of India and empowerment of every Indian," he tweeted.
The delegation thanked the Prime Minister for the move and said that their 700,000 community members were "indebted" to his government.
The delegation also presented a memorandum to Modi, requesting him to set up a task force under the Indian Home Ministry to bring the community together, develop the region and repatriate Kashmiri Pandits.
"Modi Ji brought smiles to the faces of our Kashmiri Pandit delegation, by promising a new Kashmir that we will build together, for everyone," Rajiv Pandit, who was part of the delegation, said.
He recited a religious verse (shlok) for Modi and the Indian leader joined him by reciting its last line.
Surinder Kaul, who led the delegation, told PTI, "the Prime Minister told us you have suffered a lot and together we
have to build a new Kashmir."
Lalit Kaul, from Boston, said, "It was gracious of Prime Minister Modi to meet us and acknowledge that our community has suffered a lot! His assurance that he is on the job and things will improve gave all of us a renewed hope."
Another Kashmiri Pandit delegate from New Jersey, Rakesh Kaul said that meeting Modi during was important to give him (Modi) unequivocal support at the global level for revoking Article 370 and request him to initiate steps which will address the ethnic cleansing of Kashmiri Pandits.
"We need restorative justice and a homeland that we can live in with safety, sustainability and without fear," he said.
Subhash Razdan, who came from Atlanta, said that he wanted to meet Modi because he has rekindled the hope for Kashmiri Pandits for a future possible return back to the homeland.
"If he took the challenge for the sake of unity, the least we can do is to reinforce his mission Kashmir," he said.
Jeevan Zutshi from California said, "Modi ji met the delegation and completely mesmerized me by acknowledging that Kashmiri Pandits have suffered considerably and reassured full support to the community."
The Prime Minister also met a delegation of the Dawoodi Bohra community.

I had a special interaction with Kashmiri Pandits in Houston. pic.twitter.com/07coxdg0oS

The members facilitated him with a shawl.
"The Dawoodi Bohra community has distinguished itself across the world. In Houston, I had the opportunity to spend time with them and speak about a wide range of issues," Modi tweeted.
The delegation members recalled PM Modi's visit to Indore last year to attend a programme of their community and also highlighted his association with Syedna Sahib.
Members of the Sikh community too met Modi on his arrival in Houston.
"I had an excellent interaction with the Sikh Community in Houston. I am delighted to see their passion towards India's development!" Modi tweeted.
The MEA spokesperson said the Prime Minister interacted with the members of the Sikh community, during which they congratulated him on some of the path-breaking decisions taken by the Indian government. —PTI
SHARE ARTICLE