SRINAGAR: The phone call lasts a little over four minutes and one of the speakers reveals the deep penetration of the radical Islamist appeal among the new-age militants of the Kashmir valley, where a young commander is redrawing the region’s militant alliances. 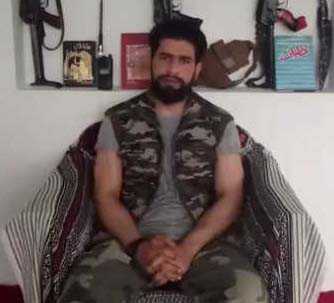 The phone call lasts a little over four minutes and one of the speakers reveals the deep penetration of the radical Islamist appeal among the new-age militants of the Kashmir valley, where a young commander is redrawing the region’s militant alliances.

The speaker is a militant named Majid Mir, according to an identity description that has gone widely viral but is not authenticated. Mir was killed on June 21 and was believed to have been associated with the Lashkar-e-Toiba at the time of his death in the gunfight.

The other speaker, purportedly, is Zakir Musa, a former engineering student and a former field commander of the Hizbul Mujahideen who is leading a major revolt in the militant movement as he drifted towards a more hardline Islamist cause and disavowed fighting for any nationalist agenda.

Musa’s allegiance to radical Islamism has pitched him against the traditional separatists, the old guard militants, and their backer Pakistan. If the call is authentic, it is so far the most telling evidence that Musa’s Islamist messages are drawing cadres from other militant organizations, including the Lashkar-e-Toiba.

“We were earlier with Lashkar, but then we changed the organisation. Now we are with brother Musa,” the speaker believed to be Mir says, as he wills that Pakistan flag should not be waved at his funeral. Musa tutors him that only an Islamic flag should be waved; Mir repeats in affirmation.

The waving of flags has become a cornerstone in the ideological battle between new-generation militants, who have revived a strain of low-intensity conflict in south Kashmir, and the old guard of militant commanders who are based in Pakistan and separatists.

The redrawing of militant alliances is evident as Lashkar-e-Toiba’s top commander Abu Dujana continues to remain in contact with Musa and apparently they share a cordial relation, according to references made in the last call of militant Mir.

Dujana’s parent organisation has been the most bitter opponent of Musa’s Islamist call but the continued contact between the two field commanders, as detailed in the call, suggest that the their equation at ground zero remains cordial.

A police officer posted in south Kashmir’s Pulwama district, where Mir was killed during a nightlong firefight, said Mir had made several phone calls during the gunfight. “I am not sure if he talked to Musa, but I heard that Mir had left some message for Zakir Musa,” said SP, Pulwama, Mohammad Aslam.

Another senior police officer said it was difficult to conclude the authenticity of the call without sending it for forensic examination and voice sampling. “We are examining it,” the senior officer said.

The police officer said Musa’s messaging had created “euphoria” among some sections. There are already signs that Musa’s support base is exerting its clout as slogans in favour of the militant commander have been witnessed at all recent militant funerals, as well as in Srinagar’s Jamia Masjid which is the stronghold of a moderate separatist.

Srinagar: Hizbul Mujahideen chief Syed Salahuddin on Monday made a rare announcement of a week-long commemoration of first death anniversary of militant commander Burhan Wani and called for shutdowns and rallies. Burhan was killed in a gunfight with security forces on July 8 last year. “We have decided to observe martyrs’ week from July 8 to July 13 and we appeal to the Hurriyat leaders, clerics and prayer leaders, and freedom-loving people to make it a success,” he said in a video message released on social media. He called for shutdown on July 8 and on July 13, the anniversary of the killing of 22 protesters in 1931. Salahuddin said rallies and conferences would also be held in Rawlakot and Muzaffarabad, the cities in Pakistan-occupied Kashmir. TNS

Pitched against separatists, backers in Pak

Former Hizb commander Zakir Musa’s allegiance to radical Islamism has pitched him against the traditional separatists, the old guard militants, and their backer Pakistan. If the call is authentic, it is so far the most telling evidence that Musa’s Islamist messages are drawing cadres from other militant organisations, including the Lashkar-e-Toiba.