NEW DELHI: The Supreme Court on Monday dismissed a plea challenging the J&K Government’s order restricting civilian traffic for a day in a week on a stretch of the national highway from Udhampur to Baramulla for the movement of security forces. 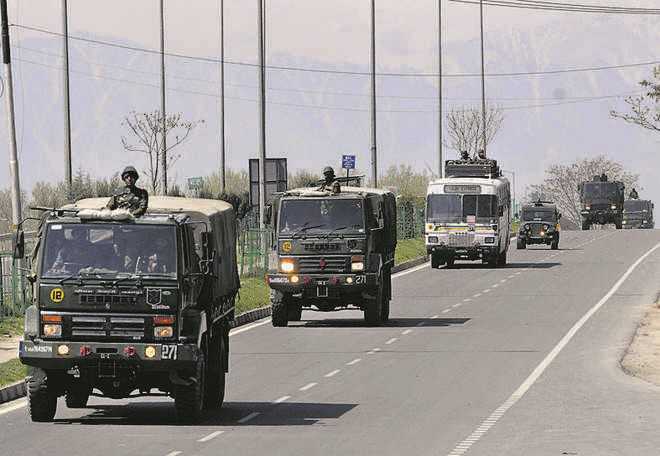 The state government had issued restrictions in an order on April 3.

The Supreme Court on Monday dismissed a plea challenging the J&K Government’s order restricting civilian traffic for a day in a week on a stretch of the national highway from Udhampur to Baramulla for the movement of security forces.

The state government’s counsel told the bench comprising Chief Justice Ranjan Gogoi and Justice Deepak Gupta that the order restricting traffic on the national highway was taken due to the ongoing election and will remain in force till May 31.

“The Additional Solicitor General appearing for the state of Jammu and Kashmir submits that the closure of the highway as on date is for one day in a week, i.e., Wednesday. He has further submitted that the said closure will be effective only till the end of May, 2019,” the bench noted in its order.

“Taking into account the reasons that have prompted the state to order for the closure of the highway which is restricted to one day in the week, we are not inclined to keep this petition pending any longer,” the bench said and disposed of the plea.

The state government had issued an order on April 3 in which it said that keeping in view the Pulwama terror attack, another car bomb attack on security forces’ convoy at Banihal and movement of forces during the Lok Sabha elections, no civilian traffic movement will be allowed on the highway stretch from 4 am to 5 pm once a week.

The order had said there would be one “dedicated day every week” for movement of security forces’ convoy when there would be no civilian traffic on the national highway from Baramulla to Udhampur from 4 am to 5 pm.

The regulation of the vehicular movement on the highway would remain in force till May 31, it had said.

The plea had been filed by Muzzafar Shah, senior vice-president of the Awami National Conference, and social worker Yasmeen Sonaullah.

The plea, filed through advocate Suhail Malik, had alleged that the “absurd and draconian decision” to restrict civilian traffic movement on the 270-km stretch on the national highway directly affects lives of lakhs of people and “its indirect economic and social impact is interminable”.

“The impugned order means a virtual lockdown of the Valley a day every week which will directly affect 10,000 vehicles plying every hour, which includes vehicles carrying patients, students, tourists, businessmen and government officials,” the plea said, adding, “such an extreme step was not even adopted during the Kargil war in 1999”. — PTI

Srinagar: Awami Ittihad Party (AIP) leader and former legislator Engineer Rasheed on Monday protested against the government for its failure to make Mughal road and Jammu-Srinagar national highway as all-weather roads. He also flayed the jailing of separatist leaders. Rasheed, along with his supporters, reached Khalsa School and marched towards the civil secretariat, which opened today after functioning in winter capital Jammu for six months as part of the traditional Durbar move. He said there would be no need to have two separate capitals for J&K if there was an all-weather road connecting the Jammu division with Kashmir. “The money spent every year on the face lifting of the city roads and pavements should be spent on making Mughal road an all-weather highway to connect the two divisions,” he said. He criticised the government over the jailing of separatist leaders and youth, saying the “repressive measures” by government agencies would alienate the Kashmiri people further. TNS