JAMMU/SRINAGAR: Nearly three months after Prime Minister Narendra Modi laid the foundation stone of the All India Institute of Medical Sciences (AIIMS) at Vijaypur in Samba district, the construction work is yet to start as the Central Public Works Department (CPWD) has not yet completed the tendering process for civil works. 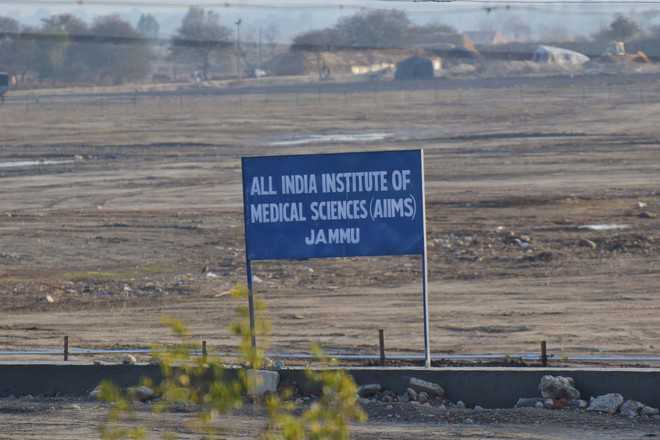 Nearly three months after Prime Minister Narendra Modi laid the foundation stone of the All India Institute of Medical Sciences (AIIMS) at Vijaypur in Samba district, the construction work is yet to start as the Central Public Works Department (CPWD) has not yet completed the tendering process for civil works.

Modi had laid the foundation stone on February 3 this year during his visit to Jammu and Kashmir. In 2015, two AIIMS were announced for J&K, one at Samba and the other at Awantipora in Pulwama district.

The one for Samba has already faced inordinate delay of more than three years due to the alleged non-serious approach of the previous PDP-BJP alliance government.

Falling on the Jammu-Pathankot National highway, it was expected that the construction would be fast-tracked, but this has not happened.

Except the boundary wall which has been completed, other civil works have not started as the process to approve tenders for starting the work is going on at a snail’s pace.

The office for the stay of engineers and supporting staff at the site is still under construction. Although the project is to be executed by the CPWD and directly funded by the Central government, the district administration has also remained non-cooperative to complete its share of works like providing water supply, power and access road.

No action is being taken over complaints about members of the Gujjar community knocking down the boundary wall at several places to use the area for the transport of cattle.

“Right from the start, the project had landed in political controversy over the eviction of tribal Gujjars from the land for the project and the provision of basic facilities. The administration was slow in its approach and now the construction work is getting delayed,” said a senior administrative officer involved in the project.

AIIMS at Vijaypur in Samba district will be spread on 258 acres and is to be constructed at an estimated cost of Rs 1,400 crore (excluding the cost of medical equipment). A deadline of four years has been kept for the completion of the project.

When completed, the 750-bedded hospital will have 75 ICUs, 18 super-specialty departments, 12 OPDs, 16 OTs, academic buildings for running as medical college for 100 students, nursing college for 60 students and school for public health.

The nodal officer for AIIMS, appointed by the state government to coordinate with the CPWD, Dr Sanjeev Puri, said, “It’s a Central project. Our responsibility was to provide basic facilities and the state has almost completed its share of work.”

Only boundary wall in 4 yrs

Four years ago, Union Finance Minister Arun Jaitley had announced AIIMS for Kashmir, but the state-of-the-art project is yet to take off.

“The work would have been started but we have to wait as the model code of conduct is in effect and the entire administration is focused on the elections,” the official said.

At present, one boundary wall of the institute has been completed and work on the other wall is underway, another official said.

The premier health institution will be constructed at a cost of Rs 1,828 crore at Awantipora in Pulwama district. The government had in December 2016 transferred over 207 acres of state land to the health and medical education department for the institute.

The construction of the institute has suffered long delays due to regional politics. Immediately after the announcement of AIIMS in the state, a row had erupted as the Jammu region demanded a separate health institute. The controversy died down when the Union Health Minister announced that separate institutes would be set up in Kashmir and the Jammu regions.

June 12, 2015: Union Health Minister JP Nadda announced two AIIMS for J&K: One at Vijaypur in Samba district and another at Awantipora in Pulwama district

September 15, 2018: The Samba administration completed the rehabilitation of 280 nomad families who had encroached upon the land