8 deaths in district so far

JALANDHAR: Following the death of a suspected patient Suman from Sangam Vihar, two more suspected swine flu patients (B category) of the district have also died. 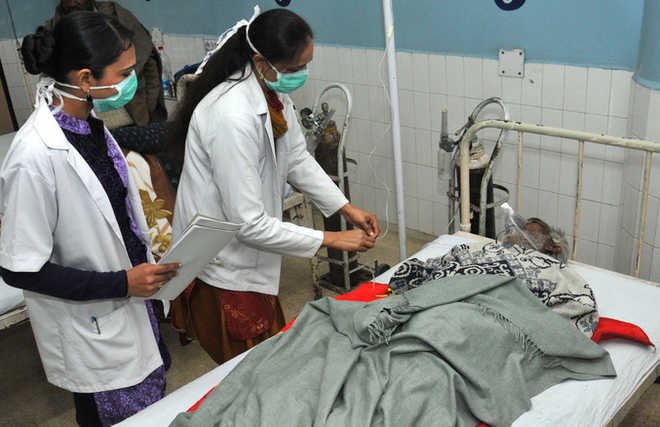 Nurses at the Civil Hospital take stock of the health of a swine flu patient in Jalandhar. Tribune photo: Malkiat Singh

Following the death of a suspected patient Suman from Sangam Vihar, two more suspected swine flu patients (B category) of the district have also died.

Paramjit Singh (60), a resident of Billy Brech village, and Joginder Singh (65) of Mohalla Baba Gadiya, Phagwara, both died at Patel Hospital yesterday. With this, the number of deaths of swine flu suspects in the district has reached five.

Reacting to the query why these patients were not categorised into category C when they reported with complications, District Epidemiologist and nodal officer IDSP Dr Satish Sood said, “These two patients (who died yesterday) had previous illnesses or complications. While they reported to the hospital with B category symptoms, their health deteriorated later.”

Patients with mild fever plus cough/sore throat with or without body ache, headache, diarrhoea and vomiting will be categorised as Category-A. They do not require Oseltamivir and should be treated for the symptoms mentioned.

Category BI is for those patients, who have high-grade fever and severe sore throat in addition to all the symptoms mentioned under Category-A. They may require home isolation and Oseltamivir. Category BII is for those who, in addition to all the Category A symptoms, have high-risk conditions like children less than 5-years-old, pregnant women, persons aged 65 or older, patients with lung diseases, heart disease, liver disease, kidney disease, blood disorders, diabetes, neurological disorders, cancer and HIV/AIDS, patients on long-term cortisone therapy. They shall be treated with Oseltamivir but no tests for H1N1 is required for Category-B (I) and (II).

In addition to the above symptoms, these patients have breathlessness, chest pain, drowsiness, fall in blood pressure, sputum mixed with blood, bluish discolouration of nails, irritability among small children, refusal to accept food, worsening of underlying chronic conditions.