Health Dept on its toes as swine flu cases rise

JALANDHAR: As many as five persons who were suspected suffering from swine flu died during the past one week. 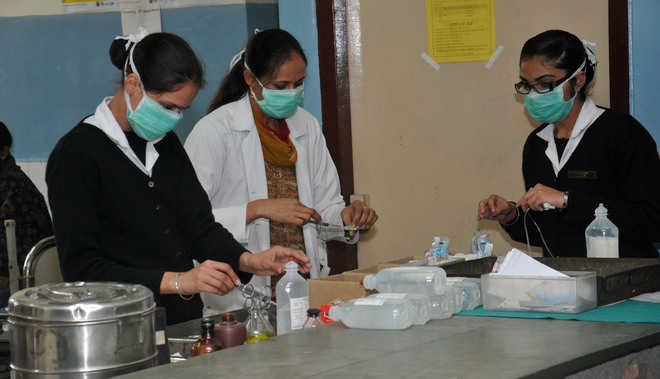 In the past, a spurt in swine flu case was never witnessed before December and January. Swine flu cases caught the Health Department off guard due to a mutation in the virus. File Photo

A 22-year-old patient from Nawanshahr died at DMC Ludhiana yesterday. She was residing with her parents at Garhshankar and had a travel history of going to a crowded religious place 15 days ago.

Jalandhar-based Sandeep (51) was the last patient who died of the disease. He was referred to DMC Ludhiana where he breathed his last.

They were suspected suffering from the disease while Balwinder Kumar from Tahli village in Nakodar and Sandeep, who died last evening, tested positive for the H1N1 virus.

At the Civil Hospital so far, as many as 11 cases of swine flu have been reported, a majority of them have been put on ventilator.

The health authorities have said as many as 29 patients suffering from the B- category of the disease are receiving Tami-flu medicine to cure the disease.

Notably in the past, a spurt in swine flu case was never witnessed before December and January. The new cases of swine flu and deaths due to it have kept health authorities on their toes. Swine flu cases caught the Health Department off guard due to a mutation in the virus

Dr Preetkamal, district IDSP coordinator, said two patients had died of the disease. He said, “Since the two deceased tested positive, two patients have died of the H1N1 virus. We have made adequate arrangements for treatment of the patients and all due care is being taken. The staff have also been instructed to take proper precautions. All staff members attending the swine flu patients have been provided protective gears. We are also providing Tami-flu medicines to all B category patients in the district. Tami-flu medicine is readily available at all CHCs and sub-divisional hospitals.”