JALANDHAR:Illegal migration is undermining the bilateral relations between India and the UK, said a delegation of the Commonwealth Parliamentary Association (CPA), UK, that visited the city today. 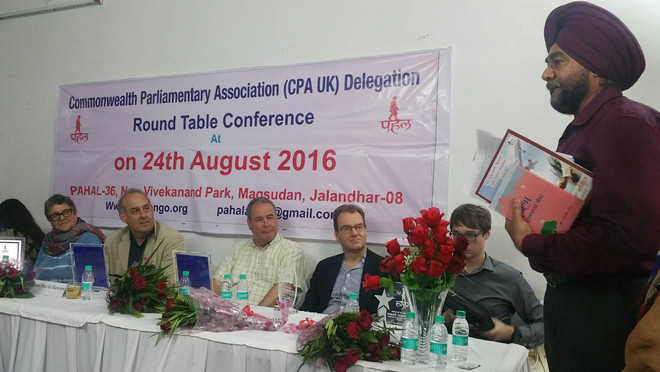 A delegation of the Commonwealth Parliament Association attends a conference in Jalandhar on Wednesday. A Tribune Photograph

Illegal migration is undermining the bilateral relations between India and the UK, said a delegation of the Commonwealth Parliamentary Association (CPA), UK, that visited the city today.

While addressing a conference on “Migration and other Diaspora Issues” hosted by city-based NGO Pahal, the British MPs sent a strong message to curb the menace of illegal migration which was affecting the relations between the two countries.

“A majority of the Asia pacific students are still coming to the UK to work as a cheap labour and not for studying. In 2013, we cracked a whip on around 200 fake universities which were running from single rooms and had intruded deep into our migration system,” said Bob Blackman, British MP from Harrow East. He said both governments were still cleaning the system affected by the illegal migration network.

“Both countries share history and should continue cultural exchange through its future generations. Post-BREXIT, the UK government is working on new policies, but our party strongly supports the proposal that students should be kept out of the migratory population figures for a global cause,” said British MP David Hanson from Delyn.

Hanging over the Arabian Sea, 190 kilometres from Mumbai, Ni...