KAPURTHALA: Though the government is making efforts to give a facelift to Sultanpur Lodhi, there is no check on stubble burning in its adjoining villages. 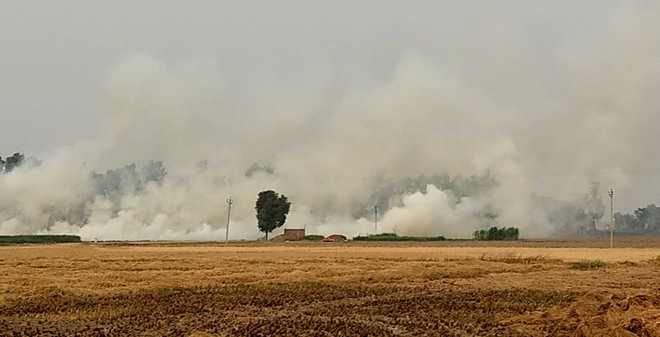 Smoke coming from fields set on fire to burn stubble in a Kapurthala village. Tribune photo

Though the government is making efforts to give a facelift to Sultanpur Lodhi, there is no check on stubble burning in its adjoining villages.

In fields leading to the holy city, the harvesting of paddy crop is still in progress and to get rid of the crop residue, farmers are engaged in the practice of burning stubble. Owing to this, visibility in the area has also reduced.

On a visit to Sultanpur Lodhi, fields setting on fire could be seen easily. The situation was worse at Dallan village that falls in the jurisdiction of the Kapurthala district administration.

Arun Kakkar, environment engineer of Punjab Pollution Control Board (PPCB), had earlier reported that more than 30 cases of stubble burning cases were detected in Kapurthala since the beginning of the harvesting season this year. Despite several instructions issued by the state government, farmers in the district can be seen engaged in stubble burning.

Last year, the government had directed PPCB officials and patwaris to keep an eye on those who resorted to the burning of straw in their fields. This year, it seems that the authorities have failed to initiate any action against them.

Farmers said they did not believe in the modern straw management techniques. They are of the view that burning residue not only saves their money but also keeps the texture of their soil intact.

One of the farmers said though they were informed about the National Green Tribunal (NGT) orders on stubble burning, they didn’t have the required machines to settle crop residue. He said subsidised machines were also not available on time.

Last year, 114 offenders were issued challans amounting to Rs3,82,500 in the district.

DC DPS Kharbanda said the administration had formed 16 teams to take check stubble burning and action would be taken against the offenders and erring officials.