Like many people, I recognise the benefits that automation has brought to certain areas of society but I still recoil at the idea of robots replacing key workers. I don’t trust robo-doctors and police bots make me uneasy. 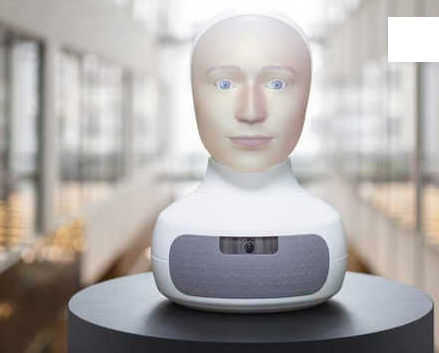 Like many people, I recognise the benefits that automation has brought to certain areas of society but I still recoil at the idea of robots replacing key workers. I don’t trust robo-doctors and police bots make me uneasy. I also worry about the threat that assistance robots can pose to human life when they malfunction. But would I be comfortable with a robot interviewing me for a job? Absolutely.

In fact, I’d like to see robots interviewing candidates in every office and recruitment agency. Why? Because robots that have been designed specifically for recruitment purposes are generally much better than humans at making unbiased decisions about a candidate. The results of an experiment in Sweden, where robot recruiters have been used to conduct interviews, proves this to be true.

Tengai is a disembodied robotic head with an innocent-looking face projected on to it. The machine can mimic human speech and mannerisms, and is designed to look friendly and approachable. It doesn’t do small talk, which ensures it only records responses that are work-related. It asks the same questions in the same order, with no variation in its tone of voice throughout. Perhaps most importantly, Tengai neither knows or cares about a candidate’s race, gender, religion, appearance or any other potentially influencing factors. Once it has carried out its duties, human recruiters or managers are then given text transcripts of each interview.

Now that Tengai has passed its probation period, it will soon be used to conduct real job interviews in Sweden. As with other examples of artificial intelligence, there’s always the danger that a machine can inherit human biases. But Tengai has been tested with a diverse set of interviewers, which minimised the chances of this occurring, according to BBC News.

Robot recruiters have their limitations, of course. Despite Tengai’s promising results, it was designed specifically for job interviews but research shows bias often occurs before applicants reach that stage. As a Runnymede Trust report states: “Despite various policy initiatives by governments over the years, bias and discrimination affect people at work from recruitment to progression: at the CV stage, during interview and once in the role.” So a tech-based solution that is only focused on interviews will be ineffective unless accompanied by similar measures that can be applied to other parts of the recruitment process.

It would also be foolish to pretend that we can rely on technology alone to solve the problems in recruitment without addressing both the implicit and explicit biases that are prevalent in wider society. It’s up to humans to educate themselves about bias and how it affects their decision-making.

Awareness is increasing, since unconscious bias is now one of the most discussed recruitment-related topics, but there’s still a long way to go. Until humans learn to make unbiased, objective recruitment decisions, we have no choice but to let the robots show us how it’s done. — The independent