A sage, scholar, philosopher, poet, dialectician, and religious reformer, Adi Shankara ( circa 788-820 CE) was a foremost exponent and propagator of Advaita Vedanta or absolute monism, which had descended in nascent form — from Yajnavalkya and Uddalaka Aruni of the Upanishads, to sage Badarayana, Gaudapada, and Govinda Bhagvadpada. 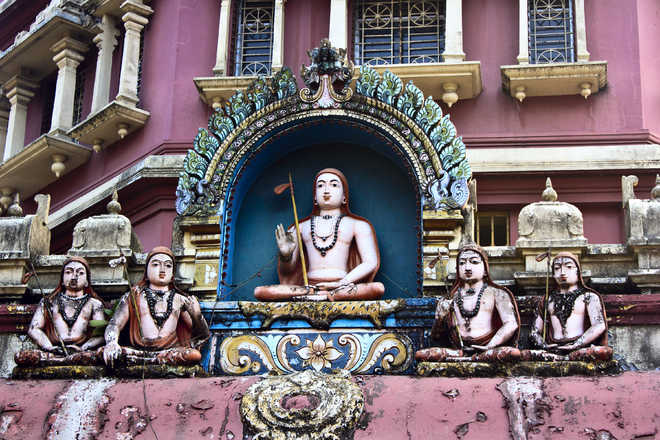 A sage, scholar, philosopher, poet, dialectician, and religious reformer, Adi Shankara ( circa 788-820 CE) was a foremost exponent and propagator of  Advaita Vedanta or absolute monism, which had descended in nascent form — from Yajnavalkya and Uddalaka Aruni of the Upanishads, to sage Badarayana, Gaudapada, and Govinda Bhagvadpada.

Hailing from a Nambudri Brahmin family of Kerala, he subordinated faith to reason, intuition to intellect, and sensory pleasures to the life of the spirit. In his time, religion had been reduced to meaningless rites and superstitions. The common man was caught between skepticism, and blind faith, worship of one god and of many deities, belief in the centrality of consciousness and in the primacy of matter, the philosophy of the void and the reality of the world.

A great debater, he challenged dogma, reproaching  many schools of thought : Nastika, who did not believe in god; Ajivika who believed in absolute determinism; Madhyamika, who favoured the theology of emptiness;  Samkhya who saw dualism between consciousness and matter;  Nyaya-Vaisheshika, who upheld the theory of atomism; Purva-Mimamsa,who ridiculed monasticism and overemphasized  rituals; Lokayata, who regarded  the world itself as the basis of reality; and  left-hand tantrics who indulged in immoral practices.

Adi Shankara extolled the virtues of truth, wisdom and justice, believing that all these and more, stem from an enlightened intellect, not vice versa. Yet he argued that morality was not the end but the means to attain true knowledge of the Self. This could be possible by four types of practices – viveka (discrimination), vairagya (non-attachment), shata sampata (six virtues), and mumukshatava (passion for enlightenment). He recommended the traditional path of righteous listening, righteous reflection, and righteous meditation, to understand and realize Brahman, the Supreme Reality, that illumines the world of phenomena and is yet unconditioned by space, time and causation.

Adi Shankara wrote authoritative commentaries on prasthanatrayi  - Upanishads, Brahmasutra and the Bhagavadgita. His soulful compositions like Saundraya Lahari, Bhaja Govindam, Atmabodha, Aparokshanubhuti, Dakshinamurti Stotra, Bhujanga Stotra and Bhaja Govindam, reveal his genius as a scholar-mystic. His philosophy is experiential and dynamic because the world is not regarded as maya, illusion, but as the modification (vivarata) of Brahman, just like the tricks of a magician who can obscure but not change the reality.

With his uncanny brilliance, command of Sanskrit and the skill to interpret scriptures figuratively, Adi Sankara reconciled and harmonized different religious viewpoints in the all-embracing fold of Advaita Vedanta.