Gandhi and teachings of Vivekananda 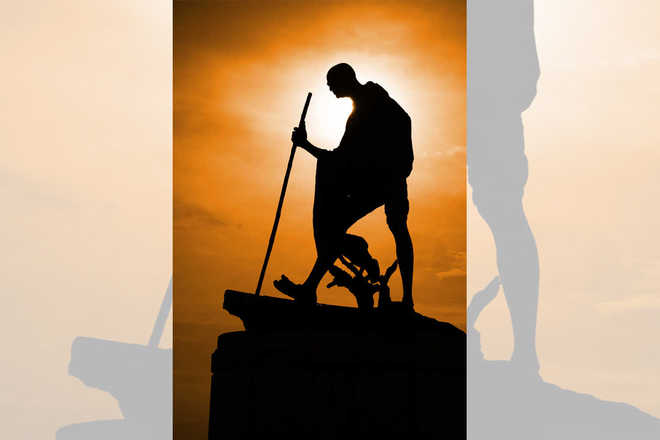 Was Mahatma Gandhi influenced by Swami Vivekananda?  Obviously, yes. During his visit to Belur Math, Kolkata, on 6th February 1921, Gandhi acknowledged that a study of Vivekananda’s writings had increased his love for India a thousand fold. To this one may add, that some dimensions of Gandhian philosophy clearly reflect an extension of Vivekananda’s ideas.

The view that right means should be employed to achieve an end, normally attributed to Gandhi, originally came from Vivekananda, as can be seen  from his lecture, ‘Work and its Secret’ delivered at Los Angeles, California, on January 4,1900. Likewise, Gandhi’s observation that contemporary religion consists ‘merely in eating and not eating’, seems to have been derived from Vivekananda’s reply to the  ‘Address of Welcome’ at Manamadurai, after returning from abroad. He said, ‘Our religion is in the kitchen, our god is the cooking pot…As long as touch-me-not-ism is your creed and the kitchen-pot your deity, you cannot rise spiritually.’

Vivekananda advised countrymen to ‘kick out’ nefarious social customs like untouchability which had kept many under perpetual subjection without rhyme or reason. ‘Unless the blood circulates over the whole body, has any country risen at any time?’ he asked. Compare this to Gandhi’s observation: ‘Hindus will certainly never deserve freedom nor get it, if they allow their noble religion to be disgraced by the retention of the taint of untouchability.’

Long before Gandhi evolved his concept of Trusteeship, Vivekananda had suggested that one should hold money ‘as a custodian for what is God’s’, in accordance with an admonition in Ishavasya Upanishad (hymn 1), which says: ten tyaktena bhunjitha, ma gridha kasya svid dhananm– ‘Enjoy thy wealth by renouncing it. Do not covet what belongs to others.’ Gandhi’s concept of trusteeship was based on the faith that ‘human nature is never beyond redemption.’

Although Gandhi’s belief in ahimsa– non-violence in thought, word and deed - was derived from many sources, it may also be traced to Vivekananda, who said: ‘There is no virtue higher than non-injury. There is no happiness higher than what a man obtains by this attitude of non-offensiveness to all creation.’ Gandhi’s observation that ‘non-violence is the soul-force - the power of godhead within us’ is similar to Vivekananda’s view that it is spiritual compassion.

Vivekananda described fearlessness as the first requisite of man-making, a point which forms the cornerstone of Gandhian spirituality. This similarity is further evident in Gandhi’s description of cowardice. In line with Vivekananda who wrote, ‘cowardice is no virtue’, Gandhi observed: ‘Cowardice is the greatest vice.’

Like Vivekananda, Gandhi described religion as self realisation. Again, like him, he believed in the essential unity of all religions. His view that ‘each religion has its own contribution to make to human evolution’ reminds one of Vivekananda who said that  religions are ‘different forces in the economy of god, working for the good of mankind.’ Gandhi’s observation that ‘the soul of religions is one, but it is encased in a multitude of forms’ seems to be a borrowing from Vivekananda who wrote: ‘Every religion has a soul behind it, and that soul may differ from the soul of another religion.’

Parallel can also be drawn between Mahatma Gandhi’s concept of education which aimed at ‘the development of the mind, body and soul’, with that of Vivekananda who observed: ‘We want to become harmonious beings, with the psychical, spiritual, intellectual, and working  sides of our nature equally developed.’ Mahatma Gandhi’s love and concern for the masses also reminds one of Vivekananda, though he went a step ahead of him, crystallizing love into sarvodaya –welfare of all, patriotism into Swaraj – self rule, and  ahimsa –nonviolence, into Satyagraha – ‘call to truth’.

—Dr Kapoor is a noted educationist, historian and spiritualist