LUDHIANA: Deepin Chitkara’s (Captain) valiant knock of 106 runs and a useful innings of 77 runs by India U-19 player, Nehal Wadhera, went in vain as Ludhiana could muster 302 runs in reply to Chandigarh’s first innings total of 394 runs. 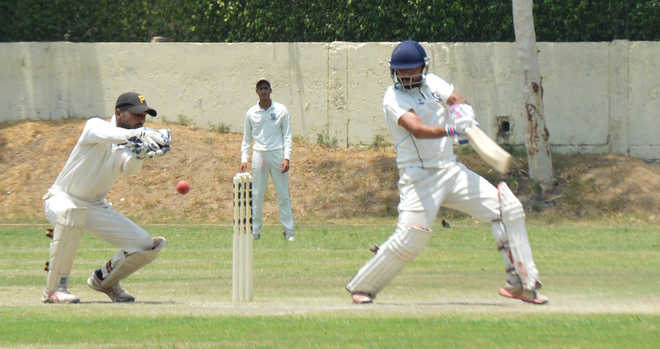 Players in action during the Punjab Inter-District (U-23) Cricket Tournament in Ludhiana on Wednesday. Inderjeet Verma

Deepin Chitkara’s (Captain) valiant knock of 106 runs and a useful innings of 77 runs by India U-19 player, Nehal Wadhera, went in vain as Ludhiana could muster 302 runs in reply to Chandigarh’s first innings total of 394 runs. The two-day match in the ongoing Punjab Inter-District (U-23) Cricket Tournament played at GRD Academy on Hambran road ended in a draw today.

Ludhiana’s innings started on a dismal note with opener Gurjot Singh losing his wicket without scoring a run. Jaish Jain, along with Nehal Wadhera took the score to 85 runs before the former got out at 41 runs.

Chitkara joined Nehal and the duo shared 101 runs partnership for the third wicket. Nehal scored 77 runs before departing. Chitkara continued with his rescue act and choose the right ball to punish. He along with Jaskaranveer Singh added 47 runs before Singh returnend by scoring 17 runs.

Ritik Singh chipped in with 11 runs. Eventually, the skipper lost his wicket (272 for 7) after making 106 runs off 113. After his departure, Ludhiana lost three quick wickets and their innings culminated at 302 runs in 73.1 overs.

As the match ended in a draw, Chandigarh on the basis of the first innings lead, secured three points while Ludhiana had to content with one point.