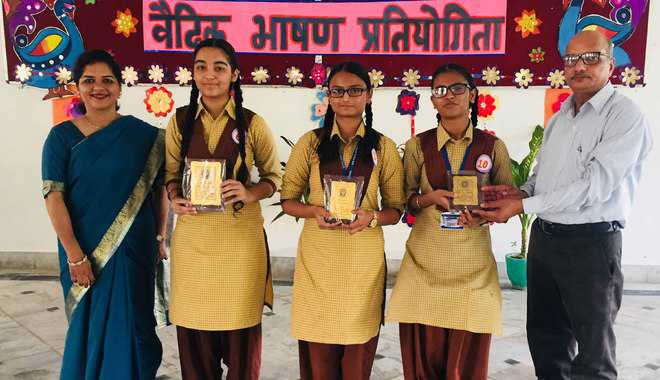 Winners of a declamation contest with their prizes at MGM Public School. Tribune photo

Ludhiana: MGM Public School conducted Ved Prachrit Mandal Declamation Contest. It was conducted in three languages - English, Punjabi and Hindi. Students of Classes VIII-X participated in the contest. They exhibited their knack of oration and articulated wonderful notions. The students who got the 1st, 2nd and 3rd positions are Kamalpreet Kaur of Hemkunt House bagged first position, while Kiran of Jagannath House stood second and Dilpreet Kaur of Hemkunt House third.

Students of St. Mahapragya School, Jagraon, clinched second position in the regional-level football competition. These matches were played at St. Anthony Convent School, Aadampur, Jalandhar. The matches were played in two categories: junior and senior. Another feather was added in the cap of St. Mahapragya School when Gurneet Singh was selected for the national level.

To explore and encourage creativity among children, Camlin art contest was held at BVM School, Sector 39, Ludhiana, in which students of Classes Nursery to X displayed their creativity. Bhumika Verma of Class KG exhibited her talent and won prize at the zonal level.