LUDHIANA: The summit clash of the 2018-19 Hero Indian Women’s League will be a re-match of a Group II game between Manipur Police Sports Club and Sethu FC, Madurai, scheduled for tomorrow. 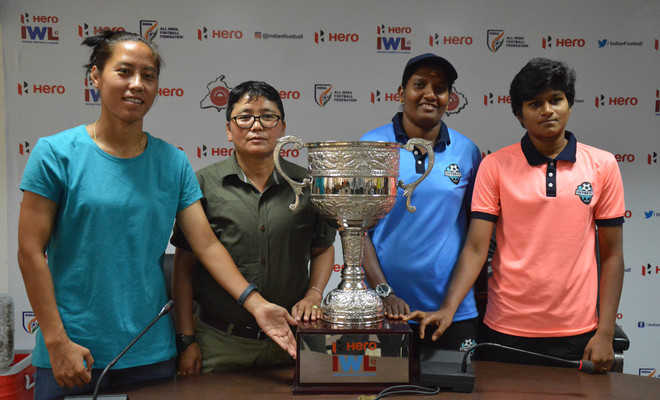 From left: Bala Devi and Surmala Chanu, captain and coach of Manipur Police SC, with Amrutha Aravind and Indumathi Kathiresan, coach and captain of Sethu FC, pose with the trophy before the final of Hero Indian Women’s League at Guru Nanak Stadium, Ludhiana, on Tuesday. Photo: Inderjeet Verma

The summit clash of the 2018-19 Hero Indian Women’s League will be a re-match of a Group II game between Manipur Police Sports Club and Sethu FC, Madurai, scheduled for tomorrow.

The two clubs have been arguably the best sides in the tournament so far and have made it on the back of some magnificent wins.

While Sethu have upheld a perfect record in the tournament so far, Manipur Police have suffered but one glitch, a 4-6 loss against Sethu during the group stage.

However, that match will be long forgotten as the two sides will look to renew their rivalries for the third edition of the league final.

Manipur Police have been in a hot form, having earned two massive 10-0 victories against SAI-STC Cuttack and Bangalore United. The side from the North-East has the mercurial Bala Devi in its attack. The 29-year-old has scored a whopping 26 goals in six matches, firmly perching her at the top of the scorers’ charts.

Supporting Bala up-front is Daya Devi, who has proved to be a versatile player for the head coach, Surmala Chanu. The India U-19 international has operated both on the wings and alongside striker Bala, to give Manipur diversity in the way they approach different matches.

However, Manipur Police have been prone to conceding goals, something that their attack has made up for well. They have let in 10 goals from six matches in the tournament so far.

“In our last match against Sethu, we did not have much of an opportunity to practice together. We had all come together in the last three-four days,” said Chanu. “But that will not happen now. We have played well since then and we will try to strengthen both our attack and defence, in order to tackle the Sethu challenge.”

What would be more troubling for coach Surmala is the fact that their first choice centre-back Romi Devi is suspended from the final, after she was sent off in the semifinal against Gokulam for a hand ball on the goal line.

What has made the Tamil Nadu side so strong is the fact that they do not really have any one constant source of goals. Their front three have fired on all cylinders – while their Nepal international striker Sabitra Bhandari has pumped in 13 goals from six games, India international wingers Dangmei Grace and Sandhiya have scored eight and seven goals apiece.

Their defence has also looked relatively strong, having conceded only five in six games so far. The likes of Sweety Devi and Ashalata Devi have kept a strong central backline for Sethu, giving the midfielders a base upon which they could launch their attacks.

However, four of these five goals were conceded against Manipur Police in their Group stage game. Sethu FC head coach Amrutha Aravind is not too worried about the previous encounter.

“Manipur are a good side. They have scored a lot of goals so far. But that does not mean that we will sit back. We also believe in an attacking game,” said Amrutha. “We have worked on our transition from defence to attack. Let’s see how that works out tomorrow.”

One player who has been crucial for Sethu has been India international midfielder Ratanbala Devi. The 24-year-old has been the engine in the middle of the park for the Madurai-based side, helping them convert a defensive manoeuvre into an attack in the blink of an eye. Her box-to-box play has helped Ratanbala score eight goals from midfield.

With two attacking sides raring to have a go at each other, one is sure to have an absolute cracker of a final on the cards. The kick-off will be at 4 pm.