Namita carves a niche for herself in judo

LUDHIANA: Another judoka, Namita Sharma from DAV Public School, Bhai Randhir Singh Nagar branch, has carved a niche for herself, winning medals during the past three years. 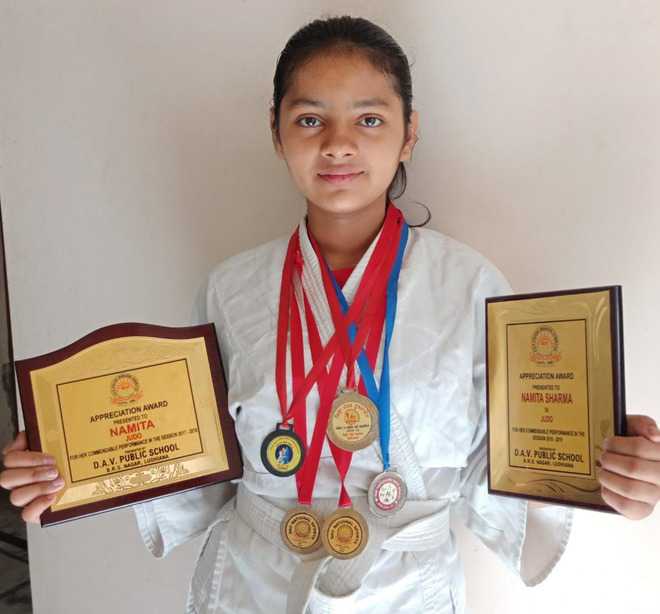 Another judoka, Namita Sharma from DAV Public School, Bhai Randhir Singh Nagar branch, has carved a niche for herself, winning medals during the past three years.

A student of Class VIII, Namita started the game in 2016 and tasted victory in a competition next year when she secured a silver medal in the Sub-Junior Ludhiana District Judo Tournament organised by the district judo association.

Trainee of Amandeep Singh, Namita Sharma gave an improved performance in the state championship held at Bathinda, wherein she finished among position holders. She bagged bronze medal in the below 40-kg weight category.

Last year, Namita Sharma clinched gold medal in the district championship conducted by the Punjab Sports Department in which she gave a stupendous performance to win top honours in the below 44-kg section.

On the basis of this achievement, Namita was selected for the Punjab State Games held under the Tandrust Punjab campaign.

For her consistent performance, Namita was selected to take part in the DAV National Sports, held at Sahibabad, wherein she had the useful competition exposure against the national-level judokas.

Jaswinder Kaur Sidhu, principal of the school, appreciated Namita’s achievements and advised the students to follow her and bring fame to the school and their parents. She also lauded Namita’s instructor Amandeep Singh for his guidance in this outstanding achievement.