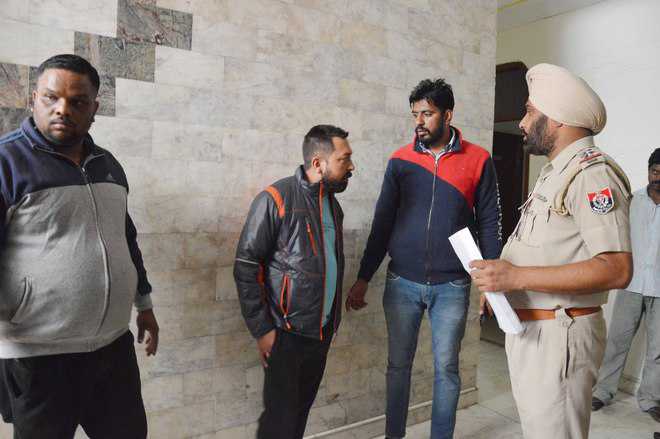 The police conducts investigation at a hotel near Clock Tower where a rice trader was found dead on Wednesday. Photo: Inderjeet Verma

A 52-year-old rice trader committed suicide at Akash Ganga Hotel, near Clock Tower, yesterday. His body was recovered in a hotel room on Wednesday morning. The deceased has been identified as Sanjiv Kumar, a resident of the Civil Lines.

As per the Station House Officer (SHO) Kotwali, Sanjiv left home after informing the family that he was going to pay obeisance at Nankana Sahib, Pakistan, yesterday evening. Instead of going to Pakistan, he booked a hotel room and stayed there for the night.

“Today morning, when the deceased did not come out of the room, the hotel staff suspected some foul play. They repeatedly knocked at the door. When no one responded, the staff brought a spare key and opened the room. The staff was shocked to see the body hanging from the ceiling fan,” said Rajwant, the SHO Kowtali.

“The trader committed suicide after rolling a long bandage around his neck and then tying it with the ceiling fan,” the SHO added.

Deceased had also consumed liquor in the room before taking the extreme step as the police recovered an empty liquor bottle.

The police said a business diary was recovered from the room in which the deceased had mentioned that he was ending his life as someone owed him money, but he refusing to return it to him.

So far, a case of abetment to suicide under Section 306, IPC, has been registered against an unknown person and further probe is on to identify the suspect. The deceased is survived by two 17-year-old and 21-year-old sons.