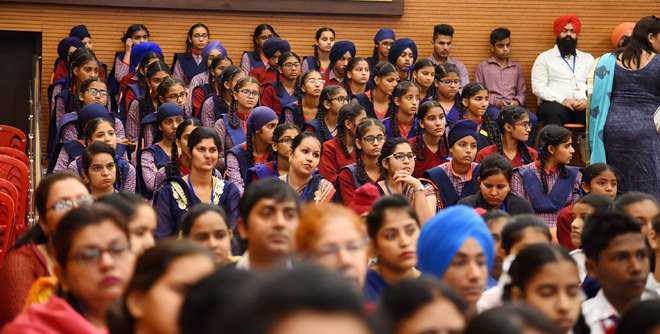 Students all ears at Sat Paul Mittal School, where the Army chief spoke during an award ceremony.

While Arunachalam was recognised in the ‘individual’ category, the award in the ‘institutional’ category was shared by The Leprosy Mission Trust India and Thirumalai Charity Trust.

The Sat Paul Mittal Appreciation Awards for the year were conferred on Dr Omesh Kumar Bharti, Shimla, and Deepalaya, New Delhi, in the two categories. The awards were given away by Indian Army Chief General Bipin Rawat, president of Nehru Sidhant Kender Trust Rakesh Bharti Mittal at a function held at Sat Paul Mittal School, Ludhiana. The winners were given a total cash prize of Rs12 lakh along with citations. Students of various educational institutes were also honoured for their achievements.

Deepalaya was awarded with the Sat Paul Mittal Award of Appreciation under ‘institutional’ category. According to information, Deepalaya has provided vocational training / skills to more than 13,000 men and women (mostly youth from underprivileged background) and established 1,425 self-help groups in rural and urban areas.

Dr Omesh Kumar Bharti was awarded the Sat Paul Mittal Award of Appreciation under ‘individual’ category for developing low cost treatment of rabies, which is about 1/10th of the prevailing cost per patient, according to the World Health Organisation.