LUDHIANA: Diwali was celebrated with great pomp and show in schools across the city. 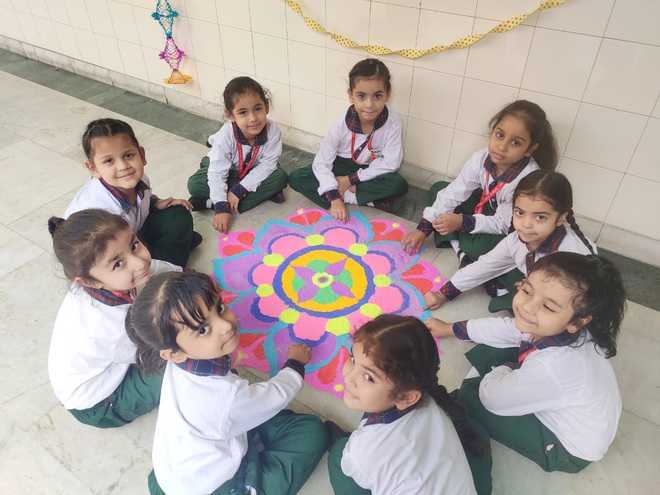 Diwali was celebrated with great pomp and show in schools across the city.

The festival of Diwali was celebrations with a scintillating cultural show. A rendition of the song ‘Deep Jale’ commenced the event. Students presented a parody on the habit of passing on gifts. The other highlights of the show included a foot tapping dance, band and bhangra performance. The Vice Principal asked students to understand the real spirit of the festival and celebrate it in an eco-friendly manner. The function ended with singing of the National Anthem.

The school was decorated with diyas. A special morning assembly was organised, during which students delivered speeches on the significance of the festival and the relevance of eco-friendly celebrations. Students of senior wing participated in an inter-house rangoli-making competition. Every class displayed their items in an innovative way with colourful dupattas.

The school celebrated a clean and green Diwali with festive gusto. A whole gamut of activities started with a special morning assembly, in which students delivered speeches on the significance of the festival and the relevance of eco-friendly celebrations. Various activities such as candle and diya-decoration, paper lanterns, best-out-of-waste creations, paperflower making, and greeting card making contests were held for all classes.

Diwali was celebrated with devotion and religious zeal. The school wore a festive look with decorated pots, diyas and lanterns adorning the reception and corridors of the school. An assembly was organised in which students laid emphasis on the urge to act responsibly and be sensitive towards environment and safety of animals. Speakers apprised the audience about adverse effects of fireworks and promoted the use of eco-friendly colours for making rangoli.

The school organised an exhibition of Diwali handicrafts prepared by students themselves. Students of Class I to X prepared various items. They brought raw material from homes and were guided to decorate it in different ways. The items prepared by students included candles, diyas and pooja thalis. Winners were awarded with prizes.

Students and teachers proffered their expertise by making drawings and other artistic items on the theme of women empowerment. Rangoli patterns demonstrated by students gained applause. The campus was adorned with multicolored qualifiers. Students also performed a one¬-act play on the history and culture of India. Students also organized a rally on the adverse effects of crackers on the environment.

A Diwali crafts exhibition was organised on the campus. The school was decorated with diyas and lights. Corridors were decked up with vibrant colours, intricate rangoli designs and other embellishments. The display was a collection of various handicrafts which were prepared by students themselves. The items included diyas, photo frames, paintings, candle stands, decorated vases, paper lanterns

The school was decorated with fresh flowers and candles. Children came in party dresses and performed Lakshmi Puja. Tiny tots danced on peppy numbers and relished cakes, chocolates and sweets.

Students took part in a rally to enlighten public to celebrate eco-friendly Diwali. Students and staff carried placards and raised slogans on how burning crackers lead to air and sound pollution. Students urged people to celebrate the festival by lighting earthen lamps, decorating their houses, performing pujas and exchanging sweets.

A special assembly was organised, in which students laid emphasis on the importance of the festival. Students prepared cards, diyas, candles and thalis. Sweets were distributed among students. Principal Poonam Sharma urged students to say no to crackers and have a safe and green Diwali.

With the aim to creat awareness among students about celebrating Green Diwali, pamphlets were distributed encouraging them to plant trees on Diwali. A special message on ‘Say no to crackers’ and ‘Say yes to pollution-free environment’ was also given. Students participated in fun-filled activities, including poster making, rangoli, origami, earthern lamp and candle-decoration among others.

Students decorated the campus with hand-made torans, candles and diyas. A rally highlightisng the message of green Diwali and say no to crackers was also carried out. The colourful rangolis made by students stole everyone’s heart. A Diwali mela was also organised for students.