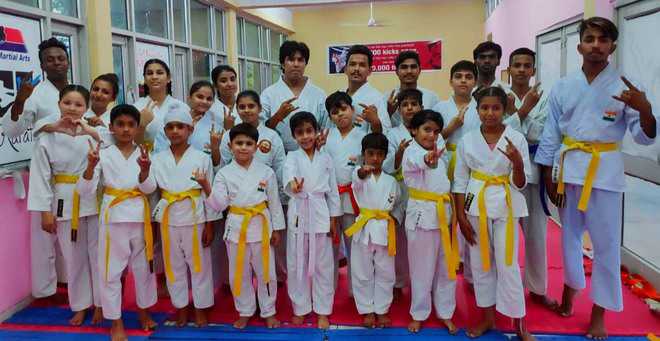 The successful karatekas during the belt-grading test in Ludhiana. Tribune photo

Participants exhibited their skills in different forms of karate namely dachi, shuki, firi, kata and kumite during the test and were awarded belts according to the results. Ashok Chohan encouraged the players and advised them to continue their hard work to achieve the next step.

In the U-12 category, Gurasees Kaur and Paramveer Singh were awarded yellow belt whereas Simran Chauhan got the blue belt.

Similarly, in the U-15 section, Sahib Singh Surjewala and Jahnavi won the yellow belt while Nikhil secured the blue belt.

Renuka, Gaganjot Kaur and Gaurav competed in the U-18 section and the trio won yellow belts while Sharan Jitu Sah was awarded yellow belt in the U-21 group.

Addressing the participants and parents, Ashok Chohan said the next grading test would be organised shortly. He motivated the players to work hard to get the next grading belt in their respective groups. Ashok also demonstrated karate skills on this occasion.