Many a hurdle in way to being world power

Prime Minister Narendra Modi has made us a new promise. 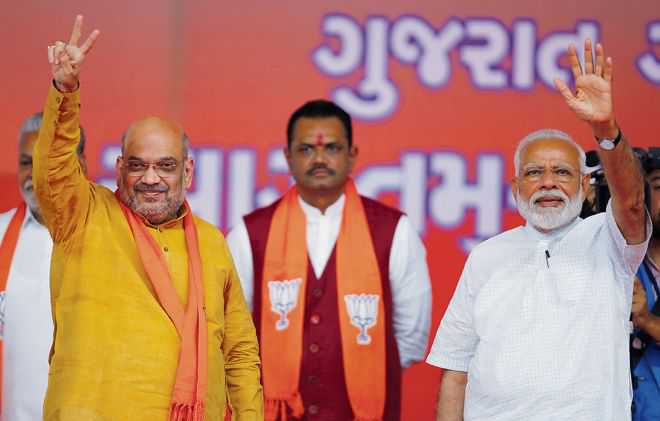 Another jumla? Modi’s pledge to regain India’s lost position in the world order would have been realistic if he had said that this would happen in two decades rather than five years.

Prime Minister Narendra Modi has made us a new promise. Speaking at a public rally in Ahmedabad on Sunday, he said that the coming five years were “the time to regain India’s lost position in the world order.” Ambitious words, since India’s share of the world product was 20 per cent in 1800 and is around eight per cent today. If he had said that this could happen over the next two decades, it would have been realistic. As such, it is yet another jumla.

For Modi now, setting the domestic agenda will be a relatively straightforward affair as compared to foreign and security policy. Though, truth be told, the domestic economy itself is not in great shape. The decline in car and two-wheeler sales and the slowdown in air passenger traffic are signals that things are not good. If Modi can restore the economy to its growth path and push it up to a high-growth zone, his second term will be successful. This requires not just political capital, but executive skills, something that has been generally lacking in the Modi team.

But to achieve all that at home, Modi needs a peaceful periphery and a stable world order. At home, Modi may be master of all he surveys, but abroad, there are other players, some positive, others inimical. There are issues, such as the building US-Iran tensions, the US-China trade spat, the rising climate of protectionism and developments like Brexit, that he cannot control.

But what Modi does have are the investments he has already made in good and even close personal ties with Japanese Prime Minister Shinzo Abe, Chinese President Xi Jinping, US President Donald Trump, Saudi and UAE Crown Princes and some other leaders.

A self-identified ‘leading power’ like India should be able to shape the policies of its neighbours. But India lacks the material power to mould their behaviour and the inability to reform its military limits its role. Far from shaping events, we end up reacting to them.

As Ashley Tellis has pointed out recently, in our very neighbourhood, our clout depends on whether or not the political forces in power are partial to India or inimical to it. So when a Khaleda Zia, or an Abdulla Yameen are around, there is trouble. But things change when a Sheikh Hasina or a Mohammed Solih are in power. And here we are not even counting our most troublesome neighbour, Pakistan.

Dealing with Islamabad/Rawalpindi remains a Herculean task that even Modi finds daunting. What will be significant is the manner in which the two countries shape the post-Balakot narrative. If Pakistan is determined to continue the use of proxy warriors, Modi may be confronted with dangerous choices in view of the red lines drawn in the wake of the Pulwama blast.

In the near abroad, Modi’s second term will have the advantage of building on the achievements of the first. India’s ties with the UAE and Saudi Arabia have blossomed and ties with the other Gulf monarchies are flourishing. This region is not just the source of the bulk of our oil and natural gas, but is also home to several million expatriate Indians whose earnings form a significant part of our annual foreign exchange earnings.

The Saudis and UAE have begun working on plans to diversify their economies and investing in India figures significantly in their scheme of things. Already, in the last year, significant investment has come in from both countries, with promises of much more.

India and the US have deepened their relationship in the last five years, with New Delhi signing on the foundational agreements relating to sharing bases and communications security. India is viewed by the US as the anchor of its Indo-Pacific strategy to balance the Chinese. In turn, India has sought the US as a balancer in the South Asia and Indian Ocean region against a rising China.

But there are important divergences which are now coming to the fore. Primary among these are New Delhi’s ties with Iran and Russia. For a while, India was favoured by waivers on issues like trade with Iran or acquisition of Russian military equipment. But in the coming months and year, we could run smack into ‘America First’.

An even bigger challenge is around the corner with China. After ups and downs, Modi's China policy moved towards an equilibrium of sorts after the Wuhan summit of April 2018. This policy has sought to balance cooperation, competition and conflict with China in a manner that ensures that there is no mutually debilitating breakdown. But with the growing China-US schism, India may once again find it difficult to maintain an even keel. The US, for example, is making the blacklisting of Huawei as the touchstone of its friendship. Can India afford to take up the US on this score? India’s ultra-cheap telecom networks depend vitally on their Chinese connection.  Following the US lead here could be a bridge too far.

On the other hand, the Sino-US standoff provides opportunities for a new Modi policy. US companies are scrambling to rebuild their supply chains away from China. India could be the destination for relocation.

But our capacity to absorb the opportunities depends on whether Modi is able to get the economy into top gear. This requires a great deal of hard work and hard choices, and the payoffs would be half a decade down the road, even if the reform process begins now.