GURUGRAM: Two groups clashed on Eid in Punhana area of Mewat, leaving one dead and eight others injured. 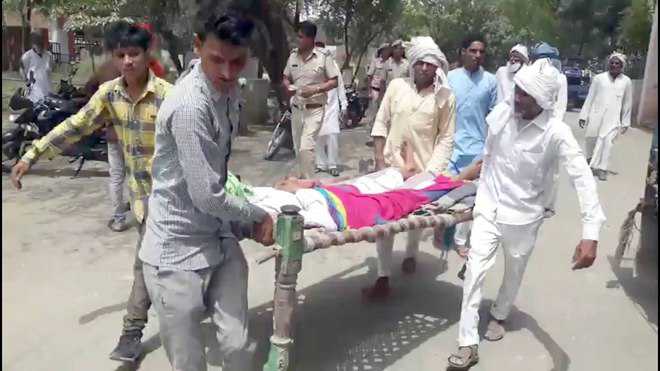 An injured person being taken to hospital in Punhana area of Mewat on Saturday. Tribune photo

Two groups clashed on Eid in Punhana area of Mewat, leaving one dead and eight others injured. The clash followed an argument over a cricket match.

The two groups not only used lathis and sticks, but also fired at each other. The police rushed the injured persons to hospital, where 60-year-old Nuh Mohammad was declared brought dead.

The police said Muslims were offering namaz in Jaiwant village on Saturday when village children, who were playing cricket, started arguing. While the children were still resolving the matter, about 35 members of the Subhan Khan group and the Nuh Mohammad group reached the spot with arms.

They beat each other and fired. No police complaint was filed till the time of filing the report.

“We are getting the postmortem done and waiting for a complaint to start making arrests,” said local SHO Rattan Lal.

A panchayat member said, “The police should have arrested the miscreants by now for spoiling Eid celebrations, but they are waiting for a complaint to be lodged. The police would press for a compromise.”

7 hours ago
5
TRYSTS AND TURNS