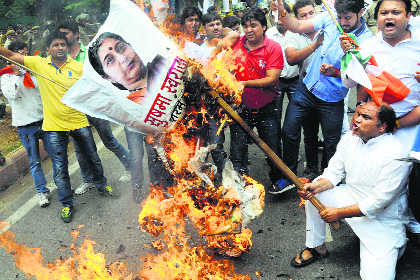 Supporters of the Indian National Youth Congress burn an image of Sushma Swaraj during a protest near her residence in New Delhi. Photo: Mukesh Aggarwal

The Opposition attack came amid a raging controversy over Foreign Minister Sushma Swaraj helping the former IPL commissioner, wanted back home in a Rs 700 crore money laundering and tax evasion case, attain documents to travel from the UK to Portugal to meet his ailing wife.

Seeking an explanation from the Prime Minister, Congress vice-president Rahul Gandhi said, “PM Modi should sack Sushma Swaraj…The tribals of Chhattisgarh too have fractured hands. Why doesn’t the government help them on humanitarian grounds?”

Rahul was taking a dig at the BJP and the government’s defence that “Sushma had helped Lalit Modi on humanitarian grounds”.

The Congress also sought to know from the government whether an FIR could be registered against Sushma for “facilitating the travel of a law violator”. Former Finance Minister P Chidambaram, who had pushed for the IPL ex-chief’s extradition with the UK, urged the government to release the India-UK communication on theepisode “in the interest of transparency”.

Congress media unit chief Randeep Surjewala said, “Incontrovertible facts of the Modigate reveal active complicity of not only the minister but the entire BJP government in aiding an absconder with the tacit support of the PM. The PM and BJP chief Amit Shah must disclose the contours of their relationship with Lalit Modi.”

Asked whether the party was seeking the PM’s resignation having raised serious allegations against him, the Congress leader said, “No. But the PM must explain his conduct and whether Sushma was acting alone or at his behest. If the latter is true, the PM will lose the moral authority to rule. All we are asking is was Modi helping Modi?”

The CPI sought Swaraj’s immediate resignation over “improprieties” while CPM general secretary Sitaram Yechury sought an explanation from the PM. "There are very serious charges raised against the minister. But the PM has been quiet.

We are asking him to tell us how this is going to be addressed... In this situation, the Prime Minister, who has the right to keep whomever he wishes in the Cabinet, has to answer,” said Yechury. Aam Aadmi Party’s Kumar Vishwas alleged that Sushma “could not have done this without the PMO’s help”.

Trinamool Congress’ Saugata Roy, without seeking Sushma’s ouster, said: “She should not have had intervened in the matter and must own up to having done something improper as a minister.”

On a day of fierce attack from the Opposition, Shiv Sena leader Sanjay Raut met Swaraj and later commented: “The PM should see these as attempts to destabilise his government as the foreign ministry has performed very well under Sushma Swaraj.”

Questioned on the party’s future strategy to target the government, Surjewala said, “We will see that as it goes, but today we want to know whether Swaraj communicated her ‘no objection’ to travel permission for Lalit Modi to the UK without the prior consent of the Finance Minister or the PM.”

He said another question was how Swaraj’s daughter was appearing as a lawyer in Lalit Modi’s passport case in India when her mother was asking the UK authorities to let him travel to Portugal.

Swaraj had said she helped Lalit Modi to sign medical consent forms of his wife seeking cancer treatment in Portugal.