‘There was no promise of FTA with India first’

The India-Maldives ties have been shaky over the past few months, specially since the Maldives signed the Free Trade Agreement (FTA) with China, the second country after Pakistan in the region to do so. 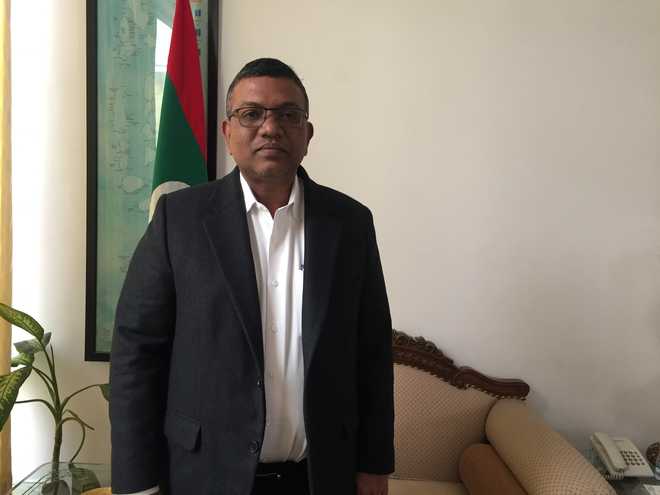 The India-Maldives ties have been shaky over the past few months, specially since the Maldives signed the Free Trade Agreement (FTA) with China, the second country after Pakistan in the region to do so. In an interview with The Tribune, the country’s  Ambassador to India, Ahmed Mohamed, claimed that contrary to media reports, New Delhi was not caught by surprise. And that there was no promise of a FTA first with India. He also stressed that India needed to hasten projects promised to neighbours. Extracts from the interview:

Where do you see the India-Maldives relationship at the moment ? What is the biggest challenge?

There are speculative interpretations of the relationship in the media. When the FTA with China was signed, the media claimed it had caught New Delhi by surprise. But this was a publicly announced process which was going on in the Maldives for the last two years and which was reported in the media too. Each embassy has its role to report to its headquarters about what is happening in the country. So India was not caught by surprise. This was media sensationalism. Engagements we have with India continue. In December last, I met the Indian Foreign Secretary twice. Hopefully, I will be meeting him this month as well.

Considering the MEA reaction, it did seem the Indian Government was not kept in the loop about FTA. Also, the Maldives President had said the Indian FTA would happen first. Why the overnight ratification of FTA, bulldozing the Opposition?

It is a being repeatedly said in India that the Maldives should be sensitive to India’s security concerns, which is why we have ‘India First’ policy. While we were having these negotiations in the public domain, the military exercises went on undisrupted. To put the record straight, there is no record or minutes in the communications and discussions promising that we would first sign FTA with India. Our President has reiterated we would like an FTA with India as well as other countries. We need FTAs to utilise our natural endowments — fisheries and tourism — to the extent that these are recognised as premium industries in the world. With China wanting a quick FTA, there was no reason we should have waited. Because we are talking of our own survival, our own drive to push our economic agenda forward.

What is holding up the FTA with India? Maldivian fisheries minister gave a statement in Colombo that an FTA with India was not working out.

I don’t know the specifics.There are certain things that need to move faster, including FTA. On Infrastructure developments, we have requests with India pending since the 2014 visit of President Yameen. There are requests for which we need speedier processing. We sit right in the middle of the Indian Ocean. We cannot move the natural boundaries. Why would we jeopardise or disrupt the Indian Ocean security balance? If there are sensitivities, I’m sure India-Maldives friendship is mature enough for the countries to sit down and discuss those specific sensitivities. What we need to do is to increase visibility of engagements through exchange of high-level visits.

So Indians are losing out to Chinese investment because of slow delivery?

A There needs to be a strategic refocusing on certain actions that India takes in actually meeting the needs of its neighbours. Each of these neighbours have their own aspirations. All these are democratic countries, and when on a democratic platform people come to power, they make promises to the people.The popularity of any politician rests on how that person delivers on the promises.

China has base in Djibouti, Gwadar. It has the Hambantota port on lease and is possibly looking for a base around the Maldives. Three Chinese naval warships docked in Male in August. How should India view this?

When we had the Male water crisis, India was the first to respond. But among many other countries who were helping Maldives was China.There were Chinese naval ships and air force in the Maldives. One should see this as normal international practice. When we have bilateral ties with a country and the navy wants to make a port call, you do not say no. That August visit was a tour Chinese navy ships were making to some 25-30 countries. One of the port calls requested was in the Maldives. The relationship between Maldives and India is independent of the relationship we have with any other country. It should not be a sensitive issue because we are not giving a military base to any country.

Why were three local councillors of the Opposition suspended for meeting Indian Ambassador Akhilesh Mishra?

The notification was not for diplomats. It was the Local Government Authority (LGA) issuing a notice to its councillors that if they met diplomats, they should seek the Ministry of Home Affairs approval. Because foreign policy is a matter of the central government, as in India. These local governments form part of national government. When they meet with a foreign diplomat, we want to know beforehand what the agenda is, lest it had security implications.

The councillors say the LGA circular was issued after their meeting with the Indian envoy.

That is not true. The UK Ambassador had a meeting with a different set of councillors before the announcement. So there was no disciplinary action against them. In this case, ironically or co-incidentally it happened to be the Indian Ambassador whom they met after the announcement.

The Indian PM has even visited Pakistan but the Maldives is one neighbour he hasn’t visited since he put off his visit in 2015. What does this say of the ties?

I do not want to speak on behalf of the Government of India (GOI) whose declared policy is ‘Neighbourhood First.’ We would assume they will continue with the policy. Any time Prime Minister Modi wants to visit the Maldives, we will welcome him.

But India’s discomfort seems to be the treatment meted out to the Opposition and the way President  Nasheed was arrested.

That has happened in the past. We have not been told that PM Modi’s visit did not happen because of that reason. It would have been better for the ‘Neighbourhood First’ policy if PM Modi had visited us.

With the US asking India to play a more prominent role in the Indo-Pacific, and the revival of Quadrilateral, do you see it as a flashpoint for India and China?

When big powers have differing views and policies on geo-politics, smaller nations like us have to be very careful about what we say and do. Whatever is happening in the geopolitical sphere with regards to the Indian Ocean security, we will keep an eye and our moves and policy directions will be guided by what is happening in the region, particularly with regards to national security interest of the Maldives.

Is there a democracy in the Maldives today?

Of course there is a democracy. In the runup to the first multi-party elections in 2008, the Opposition was saying there would be no free and fair elections. But the moment the Opposition won, the elections were  termed free and fair. This was noted by international observers. It was a similar situation in the 2014 parliamentary elections. In the runup to the local council elections in 2017, the Opposition made the same noises. It won more seats than the government and there was no noise after that. The 2018 Presidential elections will again be observed by the international community.They will be free to decide on the nature of the election process. Let us hear from them.

If R is greater than 1, the number of infected people is inc...