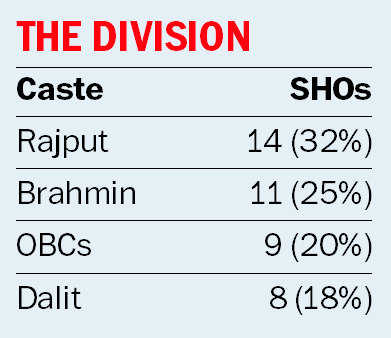 This information has been provided by Lucknow SSP Kalanidhi Naithani in response to an RTI query of activist Nutan Thakur.

The OBC representation is 20 per cent. Of the nine OBC SHOs, none are from the Yadav community, who are believed to be politically aligned to the Samajwadi Party, BJP’s rival in Uttar Pradesh politics. The OBC communities that have found a place in the city’s police stations are Kurmi, Khatik and Murai, one OBC is also a Muslim.

Of the 43 Lucknow SHOs, eight or 18 per cent are from the Dalit community, while their share in the population is estimated to be between 22 and 25 per cent. Only two SHOs are Muslims — one from the general category and another from the OBC category.

Thakur said this was in violation of the government order regarding the caste composition in the appointment of SHOs. The order prescribes that 23 per cent SHOs should be from the OBC, 22 per cent from SC and ST, 5 per cent Muslims and the remaining 50 per cent from general categories.