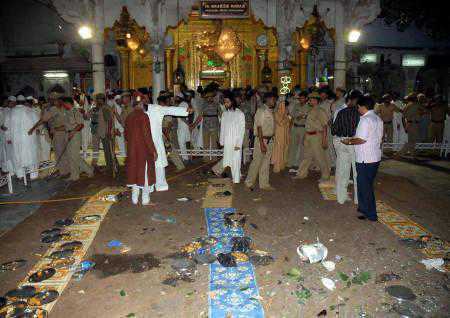 Security personnel and people gather at the site of a blast at the shrine of Sufi saint Khwaja Moinuddin Chisty in Ajmer. Reuters file photo

NIA Special Judge Dinesh Kumar Gupta pronounced the judgment in the case in the presence of both the convicts. A cash fine of Rs 5,000 was imposed on Devendra and Rs 10,000 on Bhavesh.

Gupta and Patel were convicted under various Sections of the Indian Penal Code (IPC) for criminal conspiracy and under Sections of the Explosive Substances Act and Unlawful Activities (Prevention) Act.

The special NIA court earlier on March 8 convicted three people in the Ajmer blast case, while acquitting seven others, including RSS worker Swami Aseemanand, giving them the benefit of the doubt.

On October 11, 2007, a powerful bomb had gone off on the premises of the shrine of Sufi saint Khwaja Moinuddin Chisty in Rajasthan during iftar at around 6.12 pm, killing three people and injuring 17 others.