Apache on way, to be deployed in Pathankot

NEW DELHI:The first US-made Apache AH-64E attack helicopter is set to arrive in India by mid-July and will be inducted into the Indian Air Force a few weeks later at the frontline Pathankot Air Force Station. 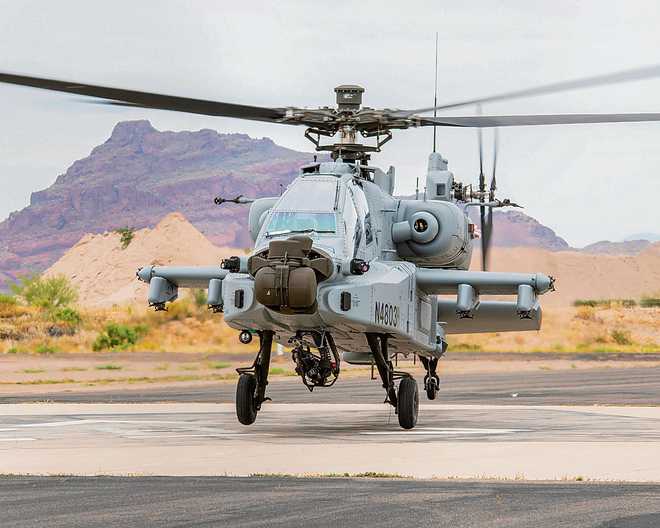 The first US-made Apache AH-64E attack helicopter is set to arrive in India by mid-July.

The first US-made Apache AH-64E attack helicopter is set to arrive in India by mid-July and will be inducted into the Indian Air Force a few weeks later at the frontline Pathankot Air Force Station.

The helicopter is slated to arrive on July 18 and will come from the Boeing facility in the US in heavy-lift cargo plane C-17. Sources said the induction is planned at Pathankot as it already holds a unit of Soviet/Russian attack helicopters.

This is the first attack helicopter from the US. The IAF currently uses Soviet/Russian origin Mi-25/Mi-35 helicopters. These are tasked with tank formations. Earlier, Boeing had handed over the first Apache to an IAF official at a production facility in Mesa, Arizona, on May 11.

The IAF had signed a contract with the US Government and Boeing in September 2015 for 22 Apaches.

Select air and ground crew have undergone training at the training facilities in US. The helicopter has been customised to suit IAF’s future requirements and will have significant capability in mountainous terrain. It can fly up to an altitude of 21,000 feet.

The helicopter has the capability to carry out precision attacks at standoff ranges and operate in hostile airspace with threats from ground.

The ability of these helicopters to transmit and receive the battlefield picture to and from the weapon systems through data networking makes it a lethal acquisition.

These helicopters will provide a significant edge in any future joint operations in support of land forces.

The Apache is fitted with new sensors, avionics and has improved night operation capabilities. Furthermore, it can control a couple of UAVs.

The airframe is designed to withstand hits from guns of up to 12.7 mm calibre. Rotor blades can withstand hits from 23 mm guns. The pilots get systems for the detection and attack of targets. The AH-64E comes with a 30 mm M230 cannon with 1,200 rounds of ammunition.