PATNA: Article 370 was like a “canker” that bled Jammu and Kashmir, Defence Minister Rajnath Singh said on Sunday, asserting that more than three-fourths population of the erstwhile state supported its abrogation. 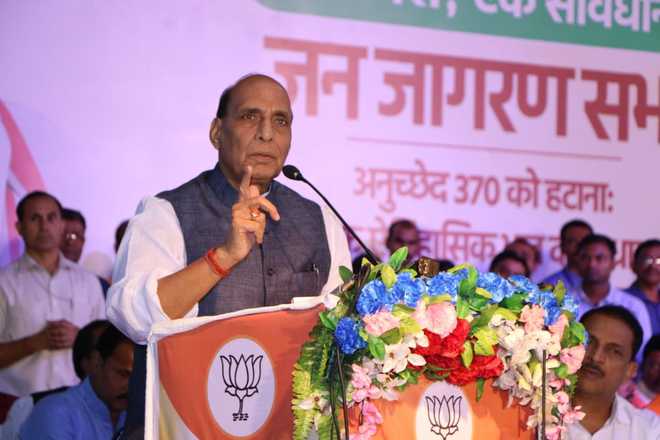 Defence Minister Rajnath Singh during the party''s Jan Jagran programme on removal of Article 370, in Patna on Sunday, September 22, 2019. — @rajnathsingh/Twitter

Article 370 was like a “canker” that bled Jammu and Kashmir, Defence Minister Rajnath Singh said on Sunday, asserting that more than three-fourths population of the erstwhile state supported its abrogation.

Addressing a “Jan Jagran Sabha” (public awareness meet) organised by the BJP here, where leaders spoke on the Narendra Modi government’s move to strip J&K of the special status, Singh said the party has lived up to its promises.

“As a nationalist party, the BJP never softened its stand on the issue. Article 370 was like a canker (nasoor) which left J&K bleeding. We have now demonstrated that we are an honest and credible party which fulfills its promises,” Singh said evoking applause from the crowd.

He blamed Article 370, and Article 35A which arose out of it, for the state being in the throes of terrorism.

“J&K will now be transformed within five years. In fact, more than three-fourths of its population wanted this provision to go. Our intentions were good and it is no surprise that our move was supported wholeheartedly by our alliance partners,” Singh said.

Cautioning the neighbouring country against promoting cross-border terrorism, in the wake of the recent developments in Kashmir, he said, “Talks with Pakistan will henceforth resume only after it stops promoting terrorism. And it must also keep in mind that J&K is an integral part of India. All discussions will only take place about Pak-occupied Kashmir.” Notably, the abolition of Article 370 has been one of the key promises made by the BJP in its election manifestos.

It was accomplished earlier this year by a presidential order and the ruling party at the Centre managed to secure a parliamentary nod for bifurcation of the state into Union territories with the help of its coalition partners.

Bihar Chief Minister Nitish Kumar’s JD(U), however, emerged as the lone dissenting voice from within the alliance as it staged a walkout in both the Houses of the Parliament after expressing his disapproval over the Narendra Modi government’s move.

The defence minister also warned Pakistan against “repeating mistakes of 1965 and 1971”, referring to the two wars fought and won against the neighbouring country, and claimed that it ran the risk of getting “dismantled” on account of flagrant violation of human rights.

“We do not need to do anything against Pakistan. It will get dismantled because of the very path it has chosen.

The country will be devoured by flagrant violation of human rights and flourishing terrorism on its soil,” Singh remarked grimly, without elaborating further.

He rubbished the “one man’s terrorist is another man’s freedom fighter” theory often used by the neighbouring country to justify militancy in the northern state.

“Let us see how many terrorists they can send (to India). None of them will go back,” he added.