BHOPAL: BJP Member of Parliament Sadhvi Pragya Singh Thakur, known for making controversial remarks, has kicked up another row by addressing Mahatma Gandhi as “son of the nation” instead of the “Father of the Nation”. 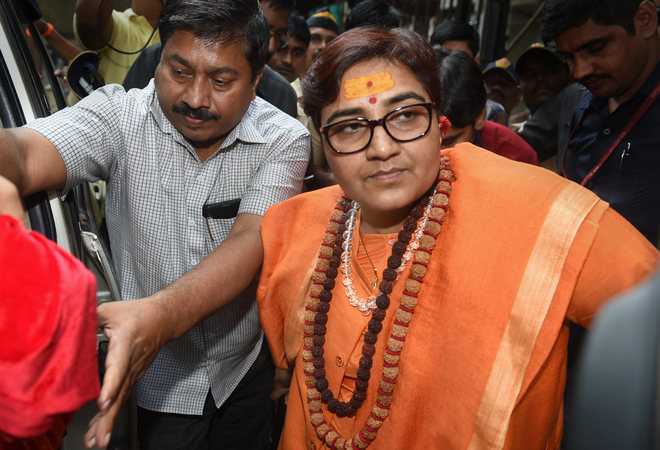 BJP Member of Parliament Sadhvi Pragya Singh Thakur, known for making controversial remarks, has kicked up another row by addressing Mahatma Gandhi as “son of the nation” instead of the “Father of the Nation”.

Talking to reporters on the sidelines of a programme of Railways on Sunday, the Bhopal MP called Mahatma Gandhi rashtraputra (son of the nation) like many other icons of ancient and medieval India.

The ruling Congress slammed Thakur for her remarks on Mahatma Gandhi, who is revered as Father of the Nation, and said the description shows her disrespect for the legendary independence movement leader.

The first-time MP was asked why she missed the BJP’s ‘Gandhi Sankalp Yatra’ organised to mark the 150th birth anniversary of Mahatma Gandhi.

In May this year, the Hindutva activist had called Mahatma Gandhi’s assassin Nathuram Godse a “patriot”.

As the statement created uproar and left the BJP red-faced, Thakur, a key accused in the Malegaon blast case, apologised and quickly withdrew the remark.

The state Congress lost no time in blasting Thakur and the BJP for her remarks on the Father of the Nation, terming them as insulting.

This shows BJPs hypocrisy. On the one hand, they are holding processions claiming to show their respect for Mahatma Gandhi and on the other, their MP is showing disrespect to this great leader, who is admired across the world, said state Congress spokesman Pankaj Chaturvedi.

Chaturvedi said, “The country loves Mahatma Gandhi and addresses him as the Father of the Nation with respect and he should be addressed like that.”