JANGIPUR: Mafuja Khatun, BJP candidate from West Bengal’s Jangipur Lok Sabha constituency, has a unique distinction. She is the first-ever Muslim woman candidate fielded by the BJP for Lok Sabha. 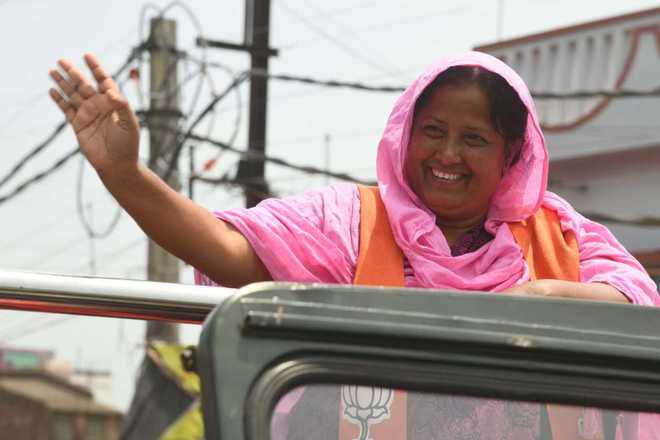 Mafuja Khatun, BJP candidate from West Bengal’s Jangipur Lok Sabha constituency, has a unique distinction. She is the first-ever Muslim woman candidate fielded by the BJP for Lok Sabha.

“The BJP has given nomination to six Muslim candidates this time — four in J&K and two in West Bengal. In the history of BJP, it has never given ticket to a Muslim woman candidate before me. There is Najma Heptulla but she was a BJP nominee for Rajya Sabha,” Khatun told this reporter.

“Prime Minister Narendra Modi and BJP national president Amit Shah have picked me up as a candidate. It is now the responsibility of the voters of Jangipur to ensure that I get elected,” she said.

Mafuja is contesting Lok Sabha elections for the first time but she is no novice in politics. She has had two terms as a CPI(M) MLA from Kumarganj constituency in the neighbouring Dakshin Dinajpur district.

Mafuja, who lost her assembly seat to the TMC in 2011, left CPI(M) to join BJP as she felt that CPI(M) was fast becoming irrelevant in the state’s political arena.

“I was also inspired by Narendra Modi’s mantra of ‘sabka saath, sabka vikas’,” says the 48-year-old.

They find work in BJP-ruled states only such as Rajasthan, Haryana, Gujarat, Maharashtra, Goa, etc, she said.

According to the BJP candidate, instead of going to BJP-ruled states to find work, people are now contemplating bringing the BJP to West Bengal by electing a BJP government in the state.

“Muslims now want the BJP in West Bengal. The TMC government in the state has failed to create jobs,” says Khatun.

“There is a lot of talk that Muslims do not want Narendra Modi to become prime minister again. This is nothing but cunning propaganda by the Congress, Trinamool Congress and CPI(M). Muslims are concerned about their livelihood more than anything else and the BJP shows promise on this front,” Mafuja claims.

Khatun said her old associates and family members are happy that she is contesting the elections on a BJP ticket.

“They are working for me and want me to win from the constituency where more than 67 per cent of the voters are Muslim,” she said.

Mafuja says that her first priority as an MP if she gets elected will be to improve the lot of ‘beedi’ labourers who live in the area in large number.

The TMC candidate from the Khalilur Rahman constituency is himself a ‘beedi’ merchant and thus he is one among those who are involved in exploiting the ‘beedi’ labourers, says Mafuja.

Congress candidate and incumbent MP Abhijit Mukherjee, son of former President Pranab Mukherjee, is not found when people need him most, says Mafuja whose constituency will go to polls on April 23.