Brits would have lost to Sikhs, ‘but for treachery by 2 Gens’

CHANDIGARH:Adept in Indo-British history, two leading historians today differed on what could have been the British Empire’s future after the First Anglo-Sikh War in 1846, but both agreed that the East India Company-led army had almost lost the war had the Sikhs — surprisingly or prompted by the treachery of two Generals — not surrendered. 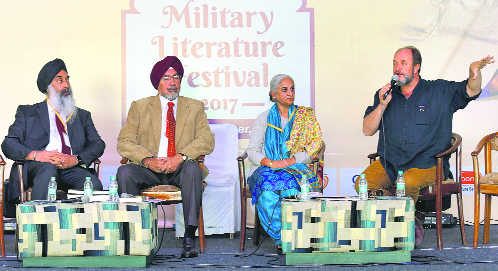 Adept in Indo-British history, two leading historians today differed on what could have been the British Empire’s future after the First Anglo-Sikh War in 1846, but both agreed that the East India Company-led army had almost lost the war had the Sikhs — surprisingly or prompted by the treachery of two Generals — not surrendered.

Speaking on ‘Anglo-Sikh wars’ at the Military Literature Festival here, London-based historian Amar Pal Sidhu argued: “The British lacked ammunition, had no water and were, thus, incapable of fighting. Then Governor General Lord Henry Hardinge was in the battlefield and he would have had to surrender. The entire British Raj could have collapsed.”

Sidhu, who has authored separate books on the first and the Second Anglo-Sikh War (1848-49), said: “Had the Sikh army not surrendered, the British Empire’s history in India would have been different. It would have been a seminal moment resembling the one at Waterloo (where Napoleon Bonaparte of France lost).”

The treachery by Generals Tej Singh and Lal Singh changed the course of history. The two owed their positions to Maharani Jindan, one of the queens of Maharaja Ranjit Singh. “Punjab probably would have been united and would still be united,” said Sidhu.

William Dalrymple, author of “Return of a King: The Battle for Afghanistan”, accepted that the military edge in the First Anglo-Sikh War was with the Sikhs. He, however, differed on the outcome of the British Empire had they (Sikhs) won the first war. “At that point, it was easy to defeat the Company-led army, though they could have used their backup of vast resources and men,” he averred.

They had resources much bigger than Punjab’s. Between 1790 and the early 1800s, the company was earning hugely from Bengal. The private army of the East India Company was twice the size of the British army.

Mandeep Rai, who was moderating the session, said: “Historians have not realised that had the Sikh army not surrendered, the Lahore durbar would have survived and the state of Pakistan would not have come into being.”

Dr Sukhmani Riar, Professor of history at PU, asserted that “the creation of the Dogra state (now J&K) after the First Anglo-Sikh War was still a mystery.  How the Sikh kingdom collapsed within a few years of the death of Ranjit Singh (in 1839) is a matter of study”.