Congress workers protest in Allahabad after removal of Nehru statue

LUCKNOW: Congress workers are on the streets in Allahabad to protest against the removal of the statue of Jawaharlal Nehru from near his ancestral house of Anand Bhawan. 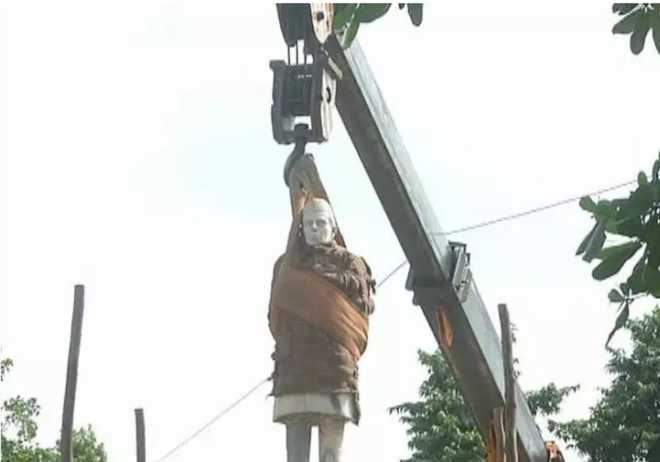 The statue being removed. Tribune photo

Congress workers are on the streets in Allahabad to protest against the removal of the statue of Jawaharlal Nehru from Balson crossing, barely 200 metres from his ancestral house of Anand Bhawan.

The decision to remove the statue and install it in a nearby park was taken by the Allahabad Development Authority and it was shifted on Thursday evening.

A hydra crane was used to shift the statue from its existing pedestal to a park near the crossing some 30 metres away.

However, the authorities are tightlipped about why the statue of Deen Dayal Upadhyay on the very next crossing is not being removed as part of the widening of the same road.

According to the ADA spokesperson, the decision was taken for redesigning the Balson crossing and widening the road in view of the approaching Kumbh 2019.

Defending its decision, the spokesperson said the re-designing was being done by an independent organisation called UMTC.

The Divisional Commissioner and District Magistrate remained unavailable for comment.

In a tweet, UPCC president Raj Babbar described the move as “unjust” which should be “condemned”.